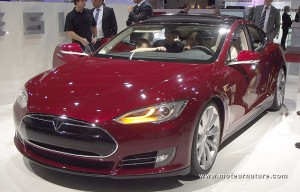 The world will soon find out if Tesla Motors is about to reverse its fortune. Now hugely in debt, Tesla Motors has acquired manufacturing capacities but it has yet to sell the first car coming from its own factory. This upcoming car will be the model S, which Tesla should launch this July. But the prospects don’t look good. The car on display at the Geneva motor show last month was so poorly built, it had would-be buyers running away, and latest sales figures for EVs are dismal. It looks more and more like demand had been overestimated.

Nissan, an established car maker, which also has made a huge bet on electric cars, has a well-built car on the market, the Leaf, with thousands of dealers to sell it all over the world. But it should sell less than 30,000 this year (Nissan sold 1,733 Leafs in the first quarter in the U.S.). The upcoming Tesla model S will be more than twice more expensive than a Nissan Leaf, and Tesla has very few sales outlets. One early investor chose to act.

The Abu Dhabi National Energy company, which owned 7,297,139 Tesla shares, has sold them all, pocketing a nice $15 profit per share. That’s a cool $113 million! Tesla shares are down about 5% since the news broke out. They will fall much further once the other investors get a better understanding of the EV market.

2 thoughts on “Moment of truth is coming for Tesla Motors, Abu Dhabi will not be part of it”