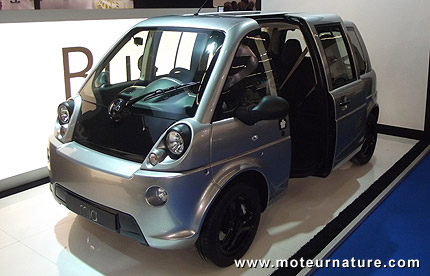 This is not a car to impress the neighbors with. It’s hardly larger than a Smart Fortwo. This is the Mia, a French car. Production started last June, and everything is now running full speed, the company has already built more than 1,000 cars. More have been sold, and even more should be very soon now that the company has lowered its price, thanks to a French regulation loophole which allows manufacturers to sell electric cars without their batteries. Those are rented. So the buyer pays a cheaper purchasing price, but he has to pay a monthly fee to pay for the battery.

A little electric Mia will cost this way 20,828 euros upfront and at least 49 euros each month (monthly battery fee varies according to mileage and contract’s length). Quite a lot of money for such a small car, but there is 5,000 euros state incentive for buying an electric car in France. So the customer will only pay 15,828 euros. Still a lot of money. And the Mia will look even more expensive next week, when Renault is expected to launch its Zoe small car for 15,000 euros (battery not included). The electric Smart too, isn’t more expensive when bought without its battery. The little Mia had it easy when it didn’t have any competition. It will be much more difficult now that it will face similarly-priced models from respected manufacturers

Its concept remains excellent though. The Mia has an airy cockpit with unparalleled ease of access thanks to its 2 large sliding doors, and its 3 seats arrangement guarantees legroom that only a limousine can match for the 2 rear passengers.