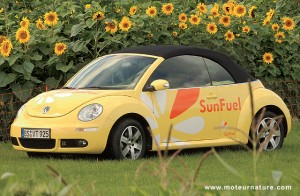 From vegetable oil to alcohols, there are many biofuels on the market, but none ever looked more promising than the Sunfuel coming from Choren. This is a second generation biofuel. It starts and uses the entire plant, or even agricultural waste. Timber waste also. That’s the Carbo-V technology, which takes 2 steps. The first is biomass gasification. This is done at a very high pressure, at a very high temperature, to make a hydrocarbon gas mixture that the second step changes into a liquid as clear as water.

It’s so good that both the Daimler group and Volkswagen invested in Choren. Both also supplied cars for testing, hence the Beetle convertible on the left. Choren was trying at the time to market its diesel fuel under the name of Sunfuel. But sometimes a good idea is not enough. Setting up a factory proved to be a lengthy process, while requiring huge investments.

Nobody ever doubted of the technology but with oil prices remaining at their low to moderate level, Choren was forced to file for bankruptcy last year. Yet the Carbo-V technology may now have another chance, since all related patents and trademarks have been acquired by Linde Engineering Dresden GmbH, a wholly owned subsidiary of the Linde group.

With the deep pockets of the German industrial gas giant, the Carbo-V technology should see the development so many people think it deserves.