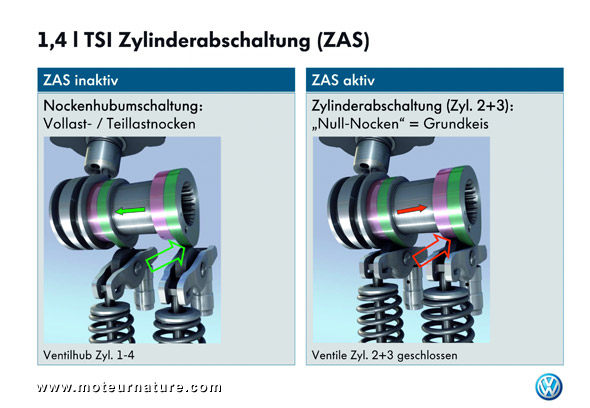 Cylinder deactivation or displacement on demand. That’s the names of the systems where an engine doesn’t use all its cylinders at all times. They can be found on a Chevrolet Camaro’s V8, or on a Honda Accord’s V6, but they’re mostly used on V8s. Honda had been the only manufacturer to use a Variable Cylinder Management (Honda’s term) on a 4-cylinder, under the hood of its Civic hybrid. That was Honda’s trick, so that the electric motor can be alone to power the car, but Volkswagen’s technology is smarter. It will also be much more widely available.

VW’s engineers have invented a camshaft with “sliding sleeves” on it. The cams commanding the valves for cylinders 2 and 3 are placed on those sleeves, which can just slide away when not needed. On partial load, when the car doesn’t need much power or torque, the engine management system cuts off the fuel supply, and it also slides away the cams for the middle cylinders, so that their valves remain closed. The 4-cylinder has become a 2-cylinder.

This cylinder shut-off system can be active between 1,400 and 4,000 rpm, Volkswagen says it can add half a mile to a gallon. We’ll see that next year in a Golf with a 1.4-liter TSI engine (in Europe), or right away in the video below.