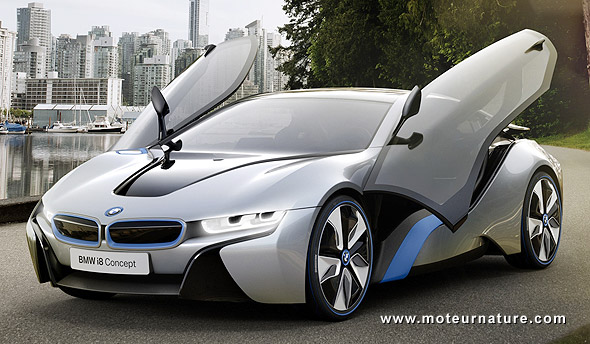 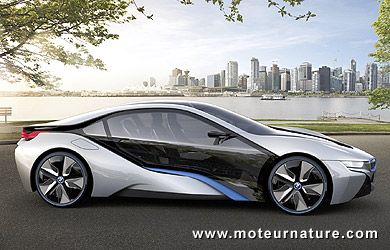 It was love at first sight. As soon as the BMW Vision EfficientDynamics concept appeared in front of me, I knew I was in love. And so were most of the other people who discovered the car with me. That was in Frankfurt 2 years ago. I’ve seen the car again last year in Paris, where it drew crowds one more time. With such acclaim, BMW had no other choice but to announce it will turn it into a production model. So it will. This BMW i8 concept is somekind of a “stepmodel” between the 2009 concept and the regular production version, which is not expected before 2014. 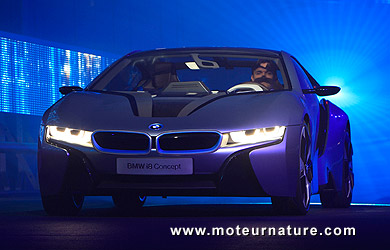 The 2009 concept was a bit tricky with a diesel engine in the back, and 2 electric motors, one for each axle. This i8 is quite simpler, it doesn’t have an electric motor in the back. It’s only an ICE there, with a generator, but that motor can’t send any power to the wheels. Its purpose is to recharge the battery if needed. Another novelty is that it’s not a diesel. It’s a gasoline unit, a turbocharged 3-cylinder. It’s a very small engine, making only 1.5-liter but BMW says it’s good for 220-hp (164-kW), while the electric motor in front gives 96-kW. With both propulsion units working, the available power is 350-hp (260-kW) with 406-lb-ft of torque. 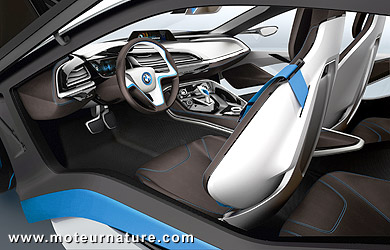 These are impressive numbers, yet I wonder if this i8 will be a joy to drive, as any BMW is supposed to be. This one more than any other. If you ever had the chance to drive a powerful BMW, you know that the best thing about the car is the instant, and precise response it gives to any input from the driver. He can brake hard in a corner, then accelerate strongly out of it, the driver’s totally in control of the car. BMW’s engineers will have to work night and day to give the driver of an i8 an equal control over this i8 plug-in hybrid. It will undoubtly be very different in soul and manners from the famous M-badged cars. 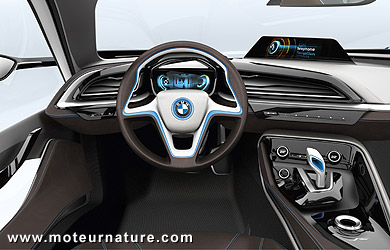 There will be an EV-mode, where the car will be a front-drive, then BMW has hinted that at a constant speed on a highway the car will run only with its gas engine. But I guess the normal mode is the hybrid one, or the 4WD mode, with the rear propulsion system making 30% more power than the one over the front wheels. To complicate things even further, an electric motor is much quicker to react than a gasoline engine which could translate in a better response from the front wheels… Then when it comes to braking, it will be conventional on the rear wheels, with all regenerative action coming from the front wheels. Of course, there’s nothing wrong with all this, but the i8 is supposed to be a sports car. 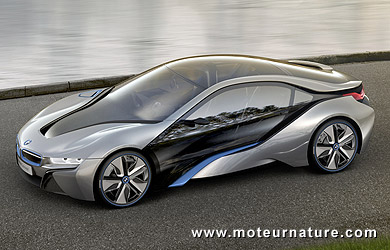 So I wonder how the engineers will manage to make all this working as a true BMW should, making the driver confident, but they may have the most exciting work an auto engineer could face. They are trying to make a high performance car with a fuel consumption that would better a Prius. I don’t know if they will succeed. Will the i8 retain the traditional virtues of a BMW? Will it match its incredible goal of 87-mpg? That is unheard of for a 155-mph car that can go from 0 to 62-mph in less than 5 seconds. So it’s worth trying. More than that, the i8 will have to justify its premium pricing. Nothing is set about it yet, but this be BMW’s flagship model. So we may expect a price tag in the neighborhood of a V12 7-series. With many CFRP (Carbon-Fiber-Reinforced-Plastics) parts, some other parts made of aluminium and magnesium, and lithium-ion cells, the i8 has all the expensive ingredients to match its fabulous look, but I just can’t imagine how it will drive.