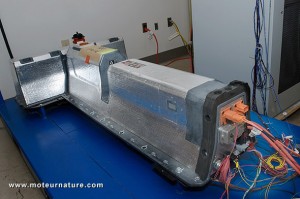 Not that there are many electric cars around, but some people are already worrying about their batteries. Where will they go when the cars hit the junkyard? As these people have been quite vocal, car manufacturers are looking for solutions. According to General Motors, the battery pack of a Chevrolet Volt will retain about 70% of its capacity after 10 years. So GM thought it could start a second life as a back-up. The car manufacturer teamed up with ABB, the energy and power specialist, to develop a solution to reuse the old batteries. It’s not normal recycling. The batteries are not modified in any way, they keep on being used the way they were meant to be, only with less strain. 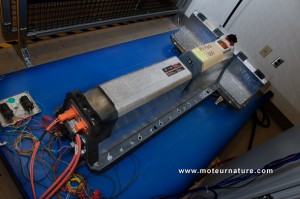 I can imagine this will keep the costs down, but the T-shape of the battery makes it inconvenient if you want to stack many of them. Anyway, GM and ABB have built some kind of a back-up powerplant which could provide electricity for 50 American homes during 4 hours. This, in case of a shortage. It just takes 33 old Chevrolet Volt batteries. This set-up could also help store green electricity, from turbines at times of high winds, and send it back to the grid when there is demand. Yet I wonder about the economic side of the plan, because I doubt many people would be willing to invest in a system whose backbone is made of 10 year-old batteries.