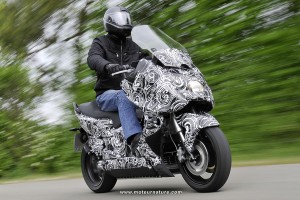 After the failure of Vectrix, the world is still waiting for a well-made electric motorbike that would also be a good performer on the road. The Chinese are working on the lower end of the market, BMW could very well be at the upper side, as it’s already doing today with gas bikes. To make its difference, BMW hasn’t chosen to use a small hub motor, but a large and powerful motor that sends its power to the rear wheel via a pulley and a roller chain. The most interesting feature is in the frame, or I’d rather say in its absence.

We know motorbikes where the engine is a stressed member, contributing to the frame stiffness. BMW’s R1100 are built this way. Though it’s not easy with a combustion engine, as it’s always vibrating. That doesn’t happen with a battery. So BMW chose to use the battery casing to take over the function of the frame. It’s made of aluminum, and it also contains the electronics of the battery management system. I say it’s clever.

The BMW E-Scooter is still a concept at this stage, but BMW has been working on the idea of an electric motorbike for several years now. I bet a production model isn’t far away. Check the video below in the meantime.