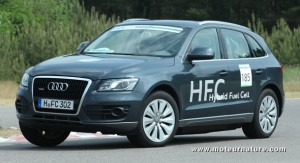 This probably was the most unexpected car at Michelin’s challenge Bibendum last week. A dark grey Audi Q5. Nobody would have noticed it if it hadn’t large “Hybrid Fuel Cell” markings on its sides. What? A fuel cell Audi? I remember an A2 concept with a fuel cell from a few years ago (at the Hannover fair), but nobody had seen it driving, and there wasn’t even a spec sheet released. Whereas I’ve seen the Audi Q5 with a fuel cell driving, more than that, I’ve seen 2 of them! 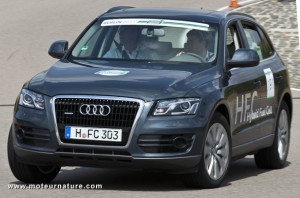 They are technical studies according to Audi, and a huge surprise to all of us. I knew Audi had built may e-tron (EVs) prototypes, and that the manufacturer is about to launch 3 hybrid models, based on the Q5, the A6 and the A8. But I had no idea they were also working on fuel cells.

This Q5 Hybrid Fuel Cell has 2 electric motors, one for each front wheel, making a total of 90-kW with 310-lbs/ft of torque. There’s a small buffer battery, its capacity is 1.3-kWh, with a 98-kW fuel cell behind it, getting its hydrogen from 2 10,000-psi tanks. That is all Audi is willing to tell.