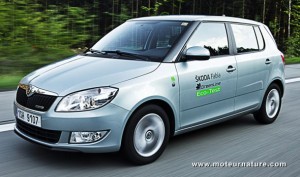 There are many reasons not to like small diesels. They’re often coarse and rough, slow and noisy, lacking the big low-end torque and smoothness of their larger cousins. The 1.2-liter from the Skoda Fabia Greenline, a Yaris-sized city car, is the smallest diesel on the European market. It makes 75-hp and 170-lbs/ft of torque. Hardly exciting numbers, even with only 2650-pounds to move.

You won’t have fun in the little Czech car, but you will go far.

Gerhard Plattner, an Austrian journalist known for his hypermiling talent tried to drive as far as he could with a single tank of diesel fuel. With 45-liters, a bit less than 12-gallons, he managed to drive an incredible 1246-miles. That’s 106-MPG! I don’t know what was his average speed, the press release doesn’t say a word about it, only that he mostly drove on the highway, in Austria and Germany, where you can’t drive legally under 50-mph. Mr Plattner is very talented, I already knew that, but we all have to be impressed by the technology. A standard production 4-seater able to get more than 100-MPG for more than one thousand miles driving at normal speed on a public highway, I would have bet it was impossible.