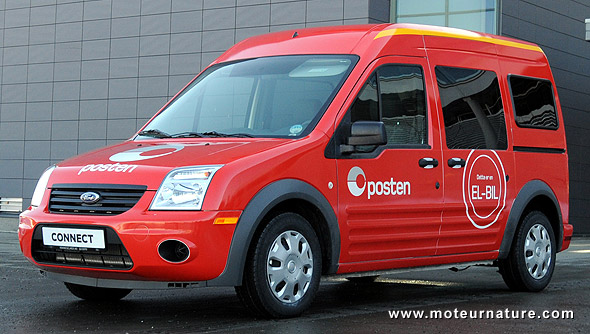 Renault is hard at work selling its electric Kangoo all over Europe, it already signed a deal with the French postal service, but Ford wants it to know that it’s in the same field. The American brand made a deal with the postal service in Norway, selling 20 electrics. The vehicles will be Transit Connect, which are converted to electric propulsion by Azure Dynamics.

Right now, the vehicles are built in Turkey, and there are shipped to the U.S. without an engine, where they receive their electric drivetrain. Vehicles going to the Norwegian postmen will probably come from America, but Azure Dynamics has announced separately that it had made a deal with Lotus Cars to handle the electric conversion in England.

When this process will be running, the electric Ford Transit Connect will be available all over Europe. That should be early next year, at a price that is everybody’s guess at this time. The Norwegian postal service will be Ford’s first European customer, and it may buy many more than 20 sometimes in the future.

The electric Transit Connect has a top speed of 75-mph, its range is 80-miles.