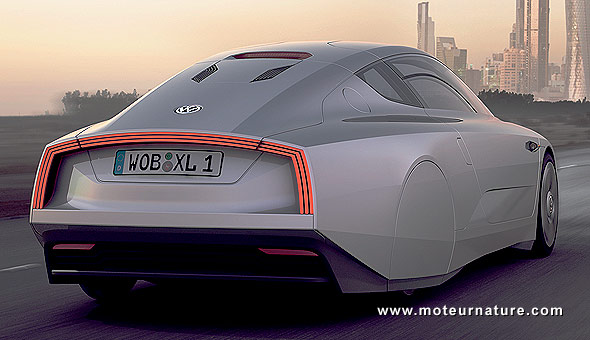 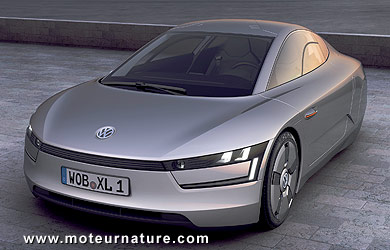 The Volkswagen XL1 promises to be the most fuel-efficient car in the world. Besides its clever plug-in hybrid power train (more about it later), a lot of that efficiency comes from its extraordinary shape, a marvel of free-flowing lines. A standard car, like the Volkswagen Golf has a drag coefficient (Cd) of 0.312 with a frontal area 2.22 m2 to give a total drag figure of 0.693 m2 (Cd.A). Those are already very good numbers. The most aerodynamic car on the market is the Mercedes-Benz E-Class Coupe, which has a drag coefficient (Cd) of 0.24. But the Volkswagen XL1 does much better, with a Cd value of 0.186 with a frontal area of 1.50-m². The product of these two parameters yields a total drag, or Cd. A value of 0.277 m2 which is 2.5 times lower than that of the Golf. With a very light weight of 1793 pounds, the XL1 only requires a power 6.2-kW (8.4-hp) to travel at a constant speed of 100-kph (62-mph).

No other car can compare, this XL1 concept is more like a bike.

The low drag is the result of a lot of work, but also clear choices. The Volkswagen XL1 is very low, it’s only 45-inches high. It’s also very narrow, 65-inches. More than that, the greenhouse area is narrower than the body. So much that to avoid the driver and passenger feeling too close, the passenger sits slightly behind the driver. The picture doesn’t show the passenger seat moved all the way to the back, it’s the normal setting. 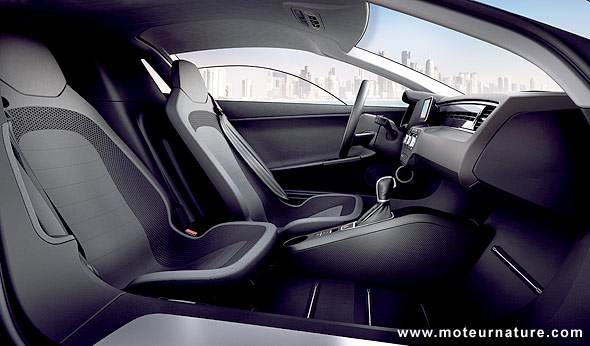 There’s also the very fast back –could someone think about putting a window there? – and the low and rounded front end. You’ve probably noticed the absence of rear view mirrors, there are cameras instead. The rear wheels are covered, with the air flows further optimized by small spoilers in front of and behind the wheels, and the whole underbody is completely covered.

That is the way of the future. With an hybrid, electric or gasoline drive train, every car will have to get a super slippery shape, and I like it. Not only because it makes cars more efficient, but also because it makes them look like they could drive at 200-mph!