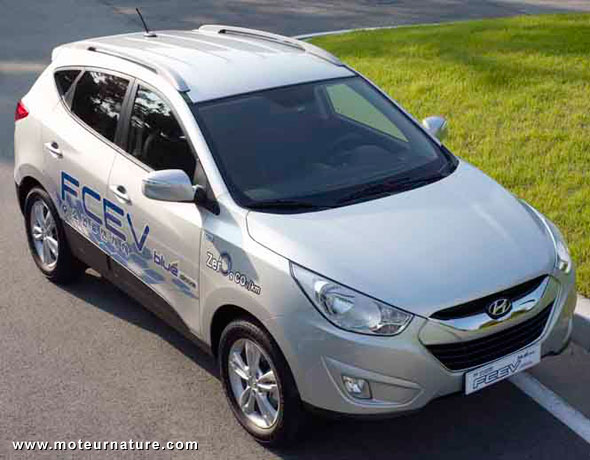 Do you believe in electric cars? I certainly do. They’ve already shown great potential with more to come, which brings so many people to talk about them. It’s hard to think of a newspaper that hasn’t published a single article about electric cars in 2010. But electric cars are not alone on the green transportation scene, fuel cell cars are right behind them.

Hyundai will be ready. I had seen their last concept last March in Geneva, with a third generation fuel cell, here comes the running model. On a Tucson’s platform (sold as an ix35 in Europe), it looks production-ready. A fleet of 48 will used in various tests this year in South Korea. A 5-seater vehicle, it has a comfortable range of 400-miles. Much more than batteries could give in a vehicle this size. The electric motor makes 100-kW, and so does the fuel cell, which gets its energy from a 5.6-kg hydrogen tank (12.36-pounds). That is fabulously efficient, 30 miles per pound of hydrogen!

Some private customers will get their hands on one in 2012, and Hyundai expects to mass-produce it in 2015.