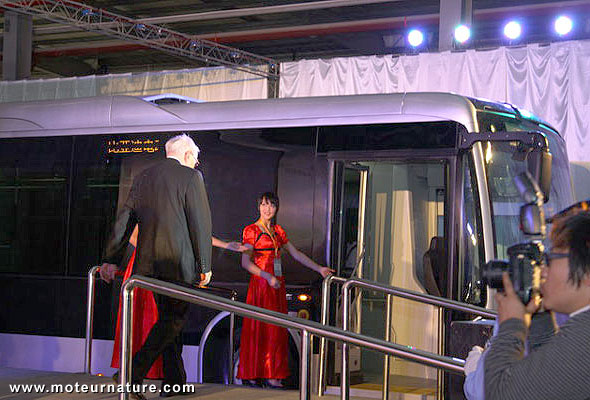 Warren Buffet was there, and so was Bill Gates, at BYD’s launch of the Chinese company’s first electric bus: the K9. A real bus, 40-ft long, running on batteries. It’s a city bus. Top speed’s a feeble 43-mph, and range’s a barely adequate 190-miles. You would need a fuel cell or a inboard generator to go further or faster, but it’s still a great accomplishment. This BYD K9 electric bus would be perfect for inner-city transportation in most of the world’s largest cities.

This K9 has 2 great features: in-wheel motors and a solar roof. The entire roof is covered with photovoltaic cells, which might help increase range, but they haven’t been taken into account in the 190-mile value. That said, it’s all we know about the K9. Chinese companies are not very good at making press kits, and no spec sheet has been published yet. Well, I guess the first customer was given more info, because he ordered no less than 1000 vehicles.

That was announced right after the launch of the K9 bus, the Hunan government will buy one thousand of them. That is nothing but huge, and BYD already looks further, its factory will be able to build several thousands of electric buses each year.

Some American or European company may start building electric buses tomorrow, but it’s doubtful it will be able build that many, and make the same economies of scale. So the Chineses are taking the lead, and I don’t know who will be able to challenge them.