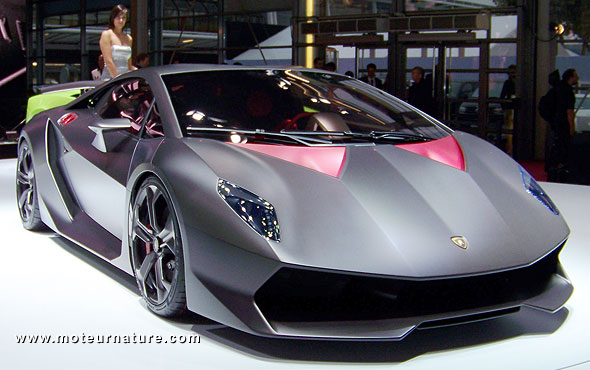 It’s a strange car with a strange name: the Lamborghini Sesto Elemento. That’s sixth element in Italian, and as there’s a theory saying that carbon might be the sixth element, this Lamborghini got this name, just because it contains so many carbon parts. Carbon, or more precisely Carbon Fiber Reinforced Plastic (CFRP). The body panels, the monocoque, the front subframe, the crumple zones, the propeller shaft and even the wheels are made of this expensive material. Why? To gain weight, and it works as this car, complete with a V10 engine and a four-wheel-drive transmission makes only 999 kg, that’s 2200 pounds. 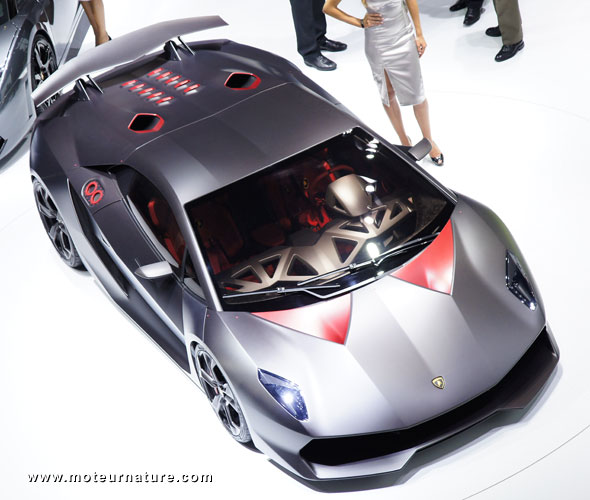 Ans there’s more with tailpipes that are made from Pyrosic, which is an advanced glass-ceramic matrix composite, or carbon ceramic disc brakes. What all this allows, is an incredible power-to-weight ratio of 1,75 kilograms per hp. Only a superbike can better that! Think that this Sesto Elemento concept is more than 1000 pounds lighter than a Gallardo Superleggera. With the same engine, performance is nothing but exceptionnal, with the 0-to-62-mph acceleration shaved by more than a full second. The Sesto Elemento catapults itself to 62-mph in 2.5 seconds. No production car can do that, since none can break the 3-seconds barrier. The car will also get much better fuel consumption, as less weight requires less energy.

The Sesto Elemento is a concept. It’s not the next Gallardo, nor the next Murcielago, which we expect next year. But its influence will be seen on all future Lamborghinis. It’s a turnaround car, because it moves away from the always bigger and faster motto. Sure the actual Lamborghini Murcielago is an incredible car, it can drives at more than 210-mph, but where can you drive at that speed?

The Sesto Elemento points in another direction, with the promise of an incredible driver’s experience thanks to an outrageous power-to-weight ratio. Top speed is no longer a priority. Our only regret is that it has a V10.

During press days at the Paris motor show, the 2 other cars on the Lamborghini’s booth were Gallardos, which means that were no V12 cars! That’s a first I’m not sure to appreciate. I applause at the idea of lighter cars, but a true Lambo must have a 12 cylinders under its bonnet. I hope the manufacturer will reduce its engine’s displacement, but not the number of cylinders.