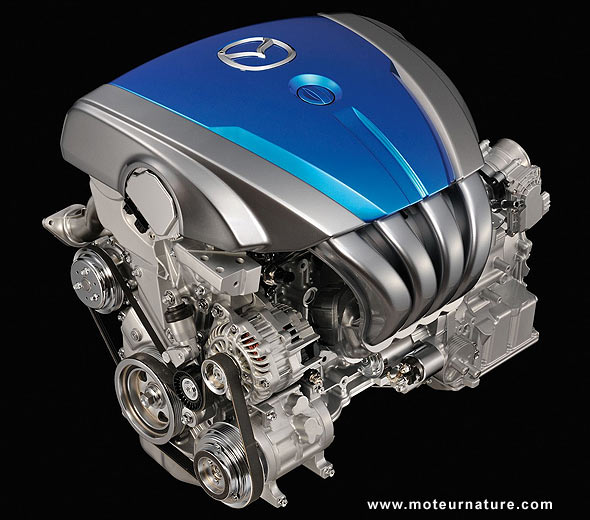 We think about hybrids, and electric drives to make cars greener, but the good old internal combustion engine still has a lot to offer. Gasoline or diesel, Mazda’s working on both, and I expect the company to come with impressive fuel economy data next year. Today Mazda reveals impressive specs.

You know what compression ratio is. In an engine, it’s the ratio between the minimum and maximum volume where air and fuel mix, and burn. On spark-ignited engines, we usually think that the higher the compression ratio, the better, with more power and better fuel efficiency. A bread-and-butter engine like the V6 in a Chevrolet Impala has a 9.8:1 compression ratio. But V8s from a BMW M3, or from a Ferrari 458 Italia have 12.5:1 compression ratios.

Forget all that now, there’s a new king of the hill and that’s Mazda with its forthcoming SKYACTIV-G engine (pictured above) and a incredible compression ratio of 14:1 ! This is unheard of in a production engine. So high that it’s hard to believe. How did they do it? How did they avoid detonation? If this SKYACTIV engine can avoid knocking when running on pump gas, those Japanese engineers know something their American or European colleagues don’t… Until now, engines with such a high compression ratio where only found on race engines, or engines running ethanol, which has a higher octane rating than gasoline.

Mazda’s doing this in the name of efficiency, and the manufacturer claims a 15% gain with this high compression ratio. Impressive. And there’s more, as this new gasoline engine is only one element of Mazda’s forthcoming SKYACTIV next-generation technologies. There’s also a new automatic transmission SKYACTIV-Drive, with a wider lock-up range to get the best torque transfer, and a new manual transmission SKYACTIV-MT, light, compact and giving improved fuel economy thanks to reduced internal friction. SKYACTIV-Chassis and SKYACTIV-Body are next with the promise of less weight, but I give more importance to Mazda’s new diesel, the SKYACTIV-D. 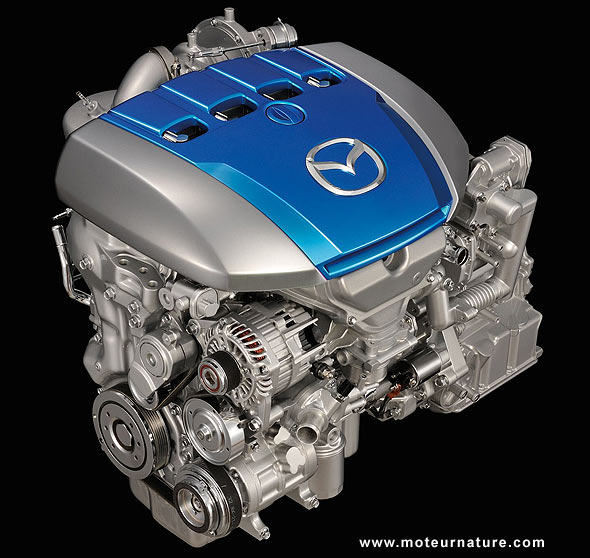 Diesel engines have much higher compression ratios than their gasoline counterparts, that is required as the ignition comes from the compression. So an atmospheric diesel has a compression ratio of 20/21:1, but nearly all diesels are turbocharged these days, with compression ratio down to 16/17:1. Well, Mazda’s going again where no other manufacturer has been, with a 14:1 ratio.

The Japanese company explains that this makes its new engine 20% more efficient, and more surprising, very clean, as it can pass the world’s toughest emissions regulations (Euro6 in Europe, Tier2Bin5 in North America, and PNLTR in Japan), without the need of an expensive NOx after-treatment. I’m impressed, and every motorist would. I guess there will be many engineers who will want to have a closer look when these engines are available in 2011/2012…