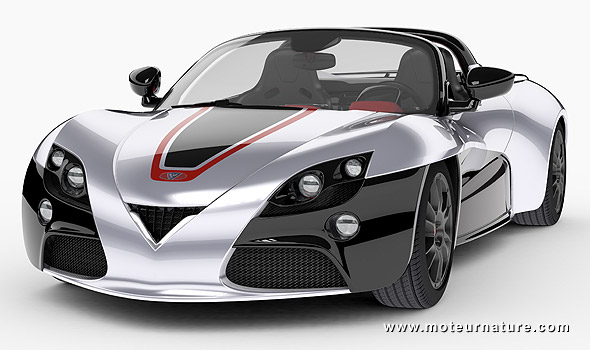 We talk so often about Tesla Motors as the leading electric car company that we often forget that Venturi was there first. A French manufacturer, Venturi is a relatively new company, it started in 1984, and became an electric car-only manufacturer 20 years later, in 2004. It currently produces the electric version of the Citroen Berlingo, a car that is used by the French postal service, but its heart and soul belongs to sports cars.

The Fetish is one. It first launched with a powertrain from AC Propulsion, but it now has an all original motor, the VM300, giving 220-kW with 280-lbs/ft of torque. Besides the front end, this new model doesn’t look much different from the 2004 one, but pretty much everything has been updated to go with that new motor. Batteries are new, too. With Lithium-Ion-Polymer cells, the pack makes 54-kWh. Venturi says it can go through 1800 cycles of charge/discharge. With a 210-miles range, the Fetish promises to be a very long lasting electric car! But there’s more. Here comes the America:

It looks like a Fetish on steroids, and that’s pretty much what it is. The body has been raised, and more than that, many, many things had to be changed to give the car off-road abilities. It still a 2-wheel drive, so it’s more like a buggy than a true off-roader, but it would be the perfect beach drive, silent and emission-free. Remember the movie The Thomas Crown affair? If some director were to do a remake, he would have to find an actor to play Steve McQueen’s role, but this Venturi America would be the perfect replacement for the buggy used in the 1968 movie.