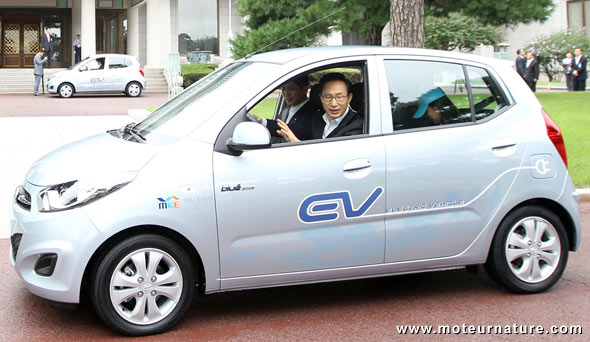 Considering the huge importance of the automotive industry in South Korea, it should not come as a surprise that the official unveiling of the country first production electric took place in the presidential palace. Lee Myung-Bak, South Korea’s president (the man at the wheel on our pictures) was there with ministers from the ministry of knowledge economy and ministry of environment. The car was not fully new, I know it as I’ve seen it last year at the Francfort Motor Show where it stood in prototype form.

The i10 is Hyundai’s European best-seller. With a 1.1-liter engine, it’s very cheap, but also a very competent small car. Hyundai’s intentions about that electric prototype weren’t clear last year, but they’ve been explained now. A first batch of 30 cars are being built this month, various government organizations in Korea will get them for a 2 years test in real life use. At the same time, Hyundai will build the industrial tools it needs to start serial production of electric cars. 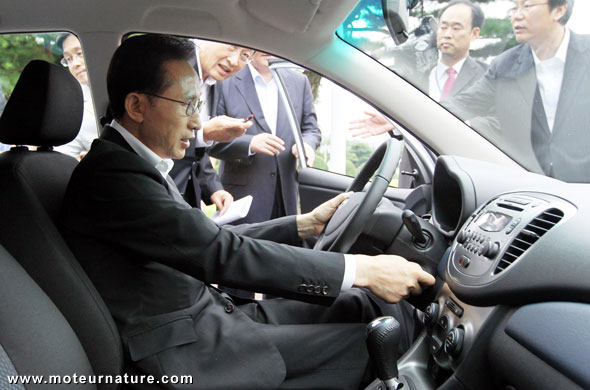 The plan is to make about 2,500 i10 BlueOn in 2012, but it’s too early to talk about the car price or availability in foreign markets. The Hyundai i10 BlueOn has a 61-kW motor (81-hp), and a 16.4 kWh lithium-ion polymer battery pack. Performances are only average with the 0-to-62-mph acceleration requiring 13.1 seconds, and a 80-mph top speed. Range is a modest 87-miles, and recharging time is 6 hours on a 220V socket, but you can get 80 percent of its capacity within 25 minutes on a 380V industrial plug.