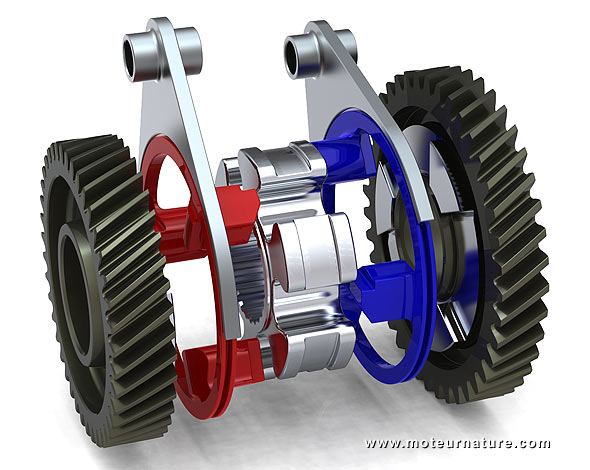 We know cars with automatic or manual transmissions but when it comes to electric cars, there’s no choice. An electric scooter or a Tesla roadster both have a single speed transmission. They can work like this because of the torque curve of electric motors, which quite often have their peak at zero RPM. So there’s no torque build-up as with a gasoline engine. Electric motors also have a larger powerband. 10,000 RPM? No problem, sir. With this, an electric car can manage do with a single speed, but that doesn’t mean it wouldn’t be better with a choice of gears. It certainly would, and many people have already thought of it before.

But it’s not that easy because an electric motor cannot withstand slippage like an ICE does. A clutch is inappropriate, as is a conventional automatic with a torque converter. A British company, Zeroshift, has done it better. They have developed an Automated Manual Transmission (AMT), a transmission which can change gears “without interrupting the engine torque to the wheels”.

Sounds good, and it would be even better with an electric motor. This is what they’re trying to do now. Zeroshift explains that their automated manual transmission is less expensive than both continuously variable transmissions (CVT) and dual clutch transmissions (DCT), and it makes a car more efficient as it keeps the engine at the speed where it’s the most efficient. This is true for both internal combustion engines and electric motors, but the gain would be greater with an electric as it starts with a single speed.

Zeroshift currently tries to sell its technology to a car manufacturer, we can only hope it will succeed.