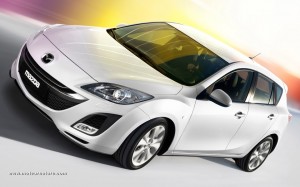 Toyota is the undisputed leader in hybrid technology, and all the other manufacturers are having a hard time trying to catch up with him. They have 2 choices, to fight, or to follow. Mazda has chosen to follow. The small japanese manufacturer has never been close to Toyota in terms of sales volume, and when it comes to technology, its only superiority is with the rotary engine. An engine that has some virtues, but unfortuntunately for Mazda fuel economy is not one of them. Mazda has been showing a few concept-cars with hybrid systems in the past decade, but nothing was clear about giving them a visa for production. Now, we know.

Hybrid Mazdas will use the same system as the Prius. Toyota will supply its former competitor under license. Toyota will not supply complete drivetrains though, as Mazda projects to use its own engines, but we understand transmission, electric motors, batteries and most importantly the software that controls everything.

It’s another great victory for Toyota. Already a giant, Toyota will now be able to build its hybrid components in larger quantities, making even greater economies of scale. It will become harder for the other manufacturers who wants to catch him…

We expect an hybrid Mazda in 2013 in Japan. There’s no information about what model would get the hybrid technology, but we expect a car the same size as the Prius. No word either about this car being exported. We shall see when will be closer to the launch of the car in Japan.