Are you 6-feet tall? Then the Estrima Biro’s length is shorter than your height. This is not your father’s Oldsmobile. It’s not chinese, it’s italian, and it is the smallest four-wheel vehicle that we’ve ever seen. I drove it, and to my great astonishment, I had some fun in it. I was not expecting that in such a cheap vehicle, something you cannot forget as it shows everywhere. And you don’t usually associate fun-to drive with vehicles that are not real cars! 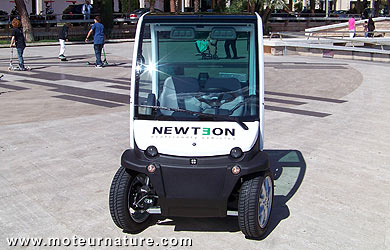 In France, the Estrima Biro is registered as a low-speed vehicle. And they’re not joking, this definitely is a low-speed vehicle. Top speed is a paltry 28-mph. It’s electric, and pretty noiseless on the road, but even blindfolded, you’ll never think that you’re traveling by limousine. One fact you can’t ignore is that the car doesn’t have doors. Actually, they’re available at extracharge. But I didn’t miss them at all. It gives you such a fantastic feeling to drive without doors in a midget like this. Stopping at an intersection, I’ve had pedestrians walking in front of me, I could have touched them just by raising my arm! 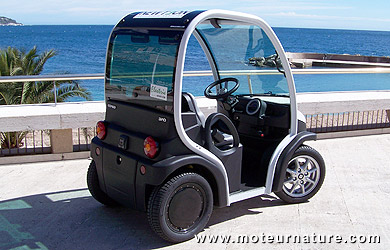 Ride and refinement were poor, but not as such to be troublesome. I said I had some fun because the wheels are precisely at each corner, and I was seating over a bunch of lead batteries that were gluing the car to the road. So the Estrima Biro certainly doesn’t have the sharpness of a kart, but it’s much closer to one than to a regular car.

In France, the Biro starts at 9,000 euros, around $ 12,000. With a 2,000 euros incentive from the government, this electric runabout is affordable to most people, and if you need to drive on a budget, it won’t get any better than this: you can drive 50-miles with one single dollar of electricity. With stops, as the range is only 30 miles. If you’re lucky enough to live in a sunny place, the little Estrima Biro will be a fun second vehicle for local errands. Also, you won’t worry anymore about parking. This matters…