The Cadillac Converj has been a very well received concept-car at the Detroit motorshow last year. It is a flashier, more luxurious 2-door version of the Chevrolet Volt plug-in hybrid. Since then, as with all successful concepts, there’s been heavy speculation about it going in production. Or not. Officially, General Motors has been silent about it. There’s been no press release indicating the Converj’s fate. Still, many people, like me, were thinking that the car would be produced. It just looks too good! But an article from Automotive News (the leading auto industry magazine, subscription required) says it won’t.

If I’m the first to be saddened by this news, I also understand it. General Motors is going to launch the Chevrolet Volt at the end of this year, and then the Opel Ampera early next year. The Opel Ampera is the european version of the Volt, with completely different sheetmetal. Both cars share the same plug-in hybrid powertrain, which is an expensive unit. I’ve never met any top accountant from GM, but I can hear them saying that “before we commit to a third model, let’s see how the market reacts to the first two”. 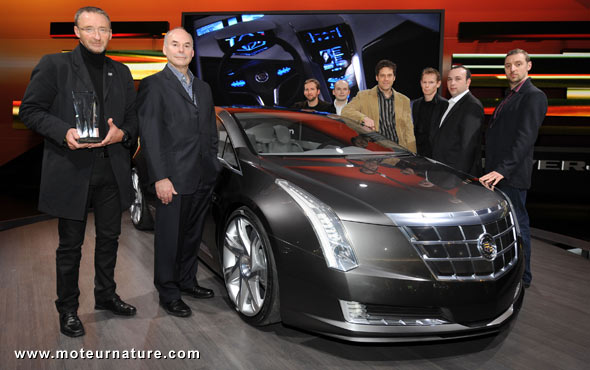 The Cadillac Converj’s design got an award, but that doesn’t say how it will perform in the marketplace. The Converj would be a pretty expensive car, more than $50,000, it’s hard to figure how many people would be willing to spend that kind of money for a 2-door plug-in hybrid. All expensive hybrids have sold very poorly until now, with the exception of the Lexus RX, which is a SUV. We to have to bet on the Chevrolet Volt. If the Volt is a sales success, I have no doubt GM will be quick to give the go-ahead to the Cadillac Converj.