I’ve been driving a Volkswagen Golf TDI BlueMotion 99g this past week. I’ve known diesels for a long time, but their frugality still amazes me. I’ve been driving 720 km (that’s 447 miles) and the fuel gauge was indicating that the tank was still half full! 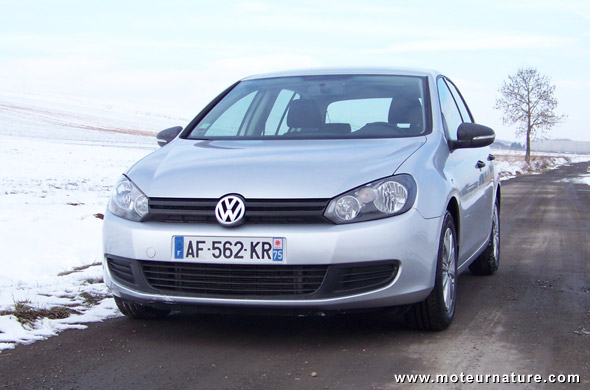 I know that fuel gauges are rarely very precise, but this is really impressive. That was with mostly road driving, and I made some city driving after that, but overall my average fuel consumption was 4,7 l/100 km as we count in France, and a nice and round 50 MPG as Americans see it. By all standards, that is impressive. With 55 liters in the tank (14.5 gallons), this is a great car to cross countries.

I doubt an hybrid would have done better, but I shall not hide the fact that it would have been far quieter. Diesels have been getting better, but there’s still some unpleasant clatter at idle. Volkswagen 5-speed gearbox could also benefit from shorter throws. It’s a stick, and a far cry from the ultra smooth transmission of a Prius.

That particular diesel is the latest from the Volkswagen group, it’s a 1.6 liter making 105 hp, and a sweet 184 lbs/ft of torque at a low 1500 rpm. Sadly, this engine is not available in the United States. Americans get a stronger 2 liter engine, but this small and more frugal unit is more than enough for most people.

But the question remains: would I choose this Golf diesel over an hybrid like a Honda Insight? Yes definitely, because the german car provides better performance, and has more headroom in the back. And over a Prius? Tough choice. The transmission of the Prius is second to none, but the Golf has better seats. So my mind would prefer the Prius, but my back will get the Volkswagen. With VW’s double clutch automatic, please.