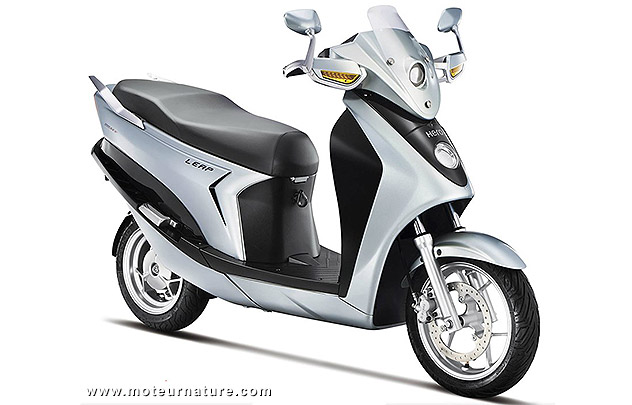 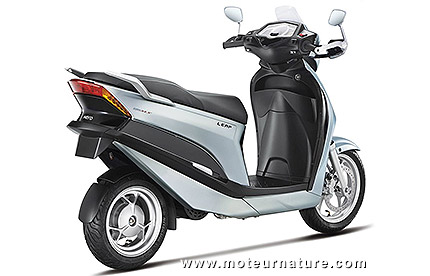 The world has already seen many prototypes of hybrid two-wheelers, and a three-wheeler, the Piaggio MP3 hybrid is on sale in Europe, but this is the first hybrid scooter which could be mass-produced. It comes from India. It was unveiled at the New Delhi motor show, and it’s built by Hero, the leading Indian motorbike manufacturer. It’s a pretty small scooter. Only 1.88 m long (74 inches), with a 13″ wheel in front and a 11″ in the back. This Hero Leap is a serial hybrid, which means that its 125 cc gas engine never sends its power to the wheel. It’s a generator charging the lithium ion battery, and it has been optimized for this. Propulsion is the job of an 8-kW motor, which also delivers 44 lb-ft of torque.

The bike weighs 309 lbs, but Hero doesn’t reveal what’s the range on battery power. The Indians are funny guys, they say their hybrid scooter has a .8 gallon fuel tank, and that the range with the gas engine running is four times the range without it. We understand the range in electric mode is the same distance a rider can travel with .2 gallon. Go figure how many miles that makes!

The last surprise is that Hero says this plug-in hybrid scooter will be a bit expensive for India. So export markets will be more important, but there’s no word yet about where the Leap will be available.