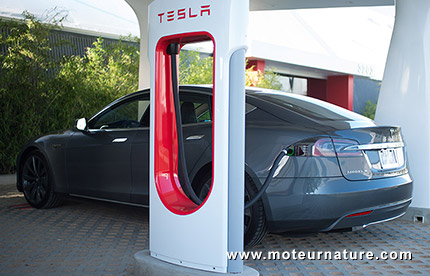 With 48 stations in America and 14 in Europe, Tesla’s network of charging stations, doesn’t seem very important, but it is. The Californian company has just said that its network has already delivered more than 2 gigawatt-hours of electricity to its customers since its launch. That shows us that more than the number of stations, it’s the quantity of electricity that the network actually delivers which truly says how successful a network is. It’s also an excellent indicator of the EV market. Do you want the electric car to be successful? Then, you want the fleet to use gigawatt-hours of electricity every month.

Tesla Motors is working on that. It started by developing the fastest charging station in the planet (135 kW in Europe, and 120 kW in America), and now it’s working on increasing the number of stations. Anyone to follow its example? Tesla Motors will assuredly give several gigawatt-hours of electricity each month by 2015.