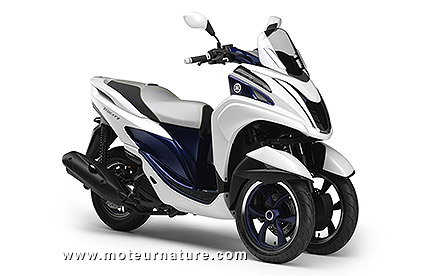 Some say they’re weird because scooters should not have more than two wheels, but Piaggio doesn’t care. It invented the three-wheel scooter, and it has been very successful selling it to urban dwellers all over Europe. It may not be sporty, but it’s much safer and more stable than a conventional scooter, and that drove new customers to the brand. People who would not have considered a scooter, bought the three wheel one. Drivers from the suburbs! They leave their cars at home because parking is expensive in the city, and they’re going to work on three wheels, saving gas, saving money and ultimately putting out much less CO2 emissions. Peugeot recently launched his own three wheel scooter, but it was the Japaneses everybody was waiting for.

They have dominated the motorbike market for years, and it was almost abnormal that they weren’t in the three wheel scooter market. Well, not anymore. Yamaha has just unveiled this Tricity concept. It’s a concept, but the manufacturer says it will become a production model next summer. Compared to the leading Piaggio, it’s smaller and lighter. With a 125 cc engine, it should be also less expensive. That should mean even more drivers leaving their cars in theirs garages.