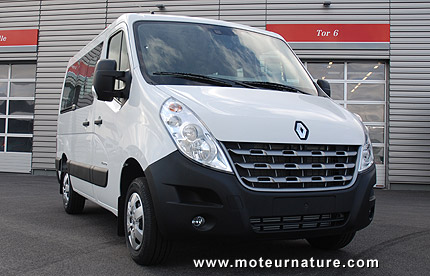 The European Union has approved a plan for France to give public funds to Renault for developing diesel hybrid technology for light trucks. This is for the Renault Trafic and Master (our illustration), popular vans all over Europe. This is a great opportunity, as the world is still waiting for a hybrid commercial van. When many of those vehicles are mostly used in an urban environment, there’s a lot to gain from hybrid tech. New hybrid technology! Renault assuredly knows that very well. Several automotive suppliers have hybrid solutions on offer, but there are for cars. They wouldn’t work with the GVWR of a van (above 8,000 lbs on some markets). Commercial customers may expect a hybrid van before the end of the decade.

No word yet from GM, but it’s worth noting the Renault Trafic and Master are also sold by Opel (GM’s European brand) as the Vivaro and the Movano in some markets.

When it comes to cars, Renault said again it has interest with hybrids but there isn’t a production hybrid Renault yet, and there is still no clear plan for one. Back to the second half of the nineties, Renault had shown a Megane hybrid prototype which wasn’t far from the first Prius, but Renault isn’t as ambitious today. Its first production hybrid car shall be a very mild one, with the electric motor a modest 10-kW unit.