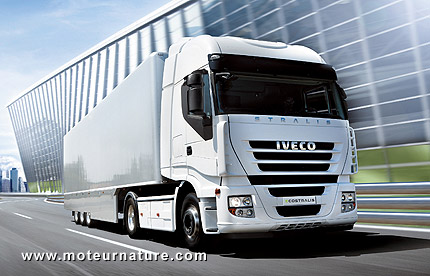 When the European Commission unveiled a strategy to boost clean transportation last January, the big news was the recommendation of the Type 2 (Mennekes) plug for EV charging, but there was also a plan to boost the use of natural gas. A follow-up reunion took place last week in Brussels, with the goal of having large trucks running on natural gas. It’s not easy because truckers need a long range. 1,000 km (620 miles) is the absolute minimum. Compressed Natural Gas (CNG) doesn’t allow that, the fuel tanks would be too big, but there’s a solution with Liquefied Natural Gas (LNG), which stores energy in much less volume. Liquefaction is a process which calls for NG to be cooled down to −163 °C (−260 °F). Some energy is lost in the process, but since it’s the only solution to guarantee truckers the long range they need, the European Commission supports it.

The plan is to have LNG stations every 400 km (250 miles) on Europe’s main highways, which will be known as Blue Corridors. A €8 million ($10.46 million) budget has been granted to open the first stations in Germany. Main benefit is less toxic emissions, because NG is much cleaner burning than diesel fuel. CO2 emissions are also slightly reduced. Finally, it’s also a bit cheaper. With NG plentiful, there’s high hope that many truckers will switch to the new fuel.