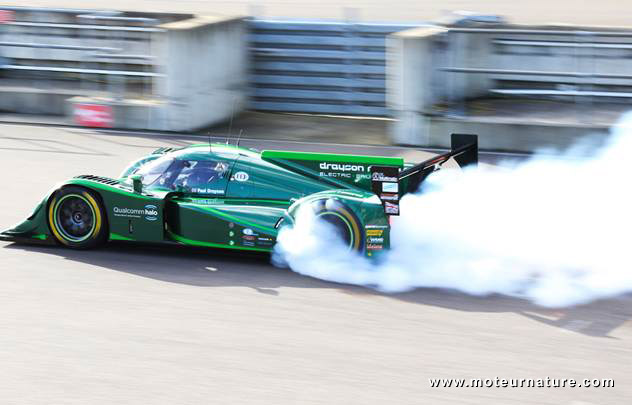 Lord Drayson, the former U.K. government minister, is now totally devoting himself to his motorsports company (Drayson Racing). He’s very active in electric car racing, and he was the first to sign up for the new FIA Formula E championship. This will start next year, but in the meantime, Lord Drayson hopes to establish a speed record with an electric car he builds himself. Unlike Venturi which will go to Bonneville salt flats to drive at 350 mph, he will stay in the U.K. and his car will also be fast on any circuit.

The base is a car which Drayson Racing has been using in endurance races. A Lola LMP1 chassis, which has its Judd V10 engine replaced by an electric propulsion system. The set-up is very unusual as there isn’t a single motor, but four of them, all sending their power to the rear wheels. So that’s two motors per wheel, each making 160 kW, for a total of 640 kW (850 hp). That is serious power, and the picture above shows how it goes. Better be in good terms with the tire shop.

Surprisingly, power has been lowered for the speed record. It’s down to 600 hp, but weight is also down. The battery, normally a 30 kWh pack has been reduced to 20 kWh. The goal is to get below the ton. Aerodynamics will also be improved with the help of a longer tail.