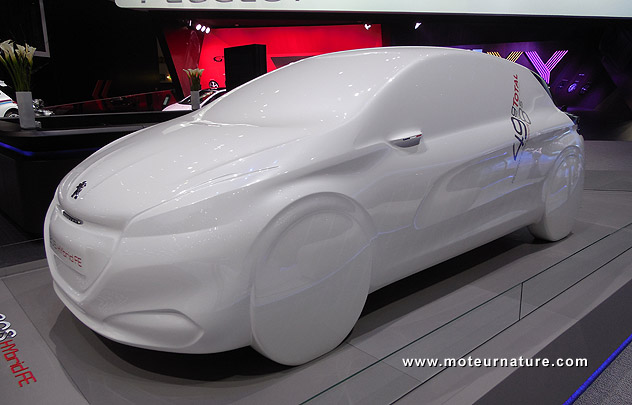 We go to motor shows like in Geneva to see cars but obviously, this isn’t one. This is a work in progress. It’s only a shape at this stage, but it will evolve into a fully functioning automobile within the next six months. We’ll see the result at the Frankfurt motor show in September. The idea behind this Peugeot 208 Hybrid FE is of a regular model made super efficient by some clever modifications. The project is called Mission 49-8 because the plan is to have a car that will have CO2 emissions of 49 grams per km, while accelerating from 0 to 62-mph in 8 seconds. To put things into perspective, the lowest CO2 emitter in the European market today is the Toyota Yaris hybrid (it shares its drivetrain with the Prius c and Aqua) with 79 g/km, while a car that accelerates like this is a very decent performer. 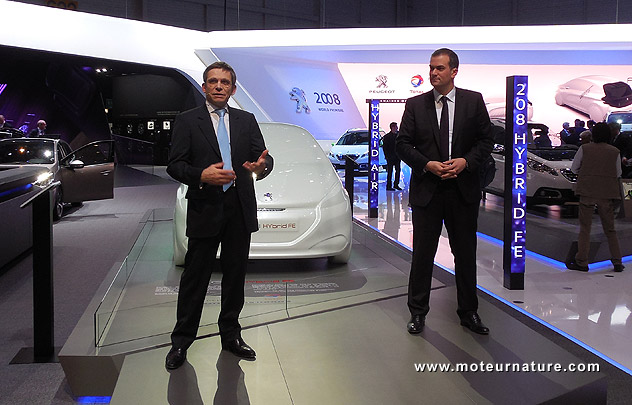 The starting point is a base Peugeot 208 fitted with the new 3-cylinder engine (82 hp). The body will get many enhancements to make it more slippery, with the target of a .25 Cd. A lot of work will be done to make the car lighter, the goal here is take 440 pounds out. One trick will be the use of bio-sourced resins. Then all frictions will be optimized thanks to Total. The oil company has a subsidiary which manufactures lubricants, and it signed an official partnership with Peugeot for this Mission 49-8 project. Engine oil and all lubricants in the car will be special, and more effective than standard products to reduce all frictions, and make the car more fuel-efficient.

To crown it all, and achieve the acceleration goal, the small 3-cylinder will need some extra power. That will come from a small electric motor. That should not be a heavy system like in Toyota’s hybrids, but something lighter and simpler, most likely a KERS as in racecars. We’ll know everything about it in Frankfurt, stay tuned.