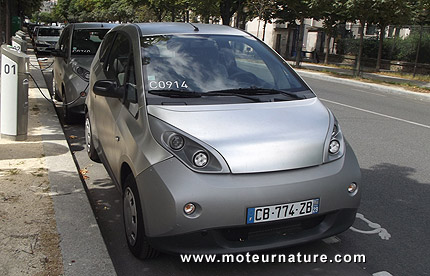 This is a surprise as most people (this writer included) thought the Bluecar would never be on sale. But it is, though not entirely. It’s possible to buy the car, but the battery is rented, and it’s impossible to buy the car without it. So the Bolloré Bluecar is available for €19,000 ($24,848), and the monthly rent for the battery is €80 ($105, with unlimited mileage). Not exactly cheap considering buyers will have to pay the battery’s rent for as long as they will keep the car. And there’s more because the buyer will have to pay for the installation of a 16 amps wallbox at a price of €995 ($1,301, wherever he lives in France), or buy a 10 amps cord to charge on a standard wall socket for €700 ($915). We note that the Bluecar doesn’t accept fast charging. Even with the wallbox, it requires more than 8 hours for a full charge.

Twelve dealerships have already opened in France, but it’s quite clear the Bluecar is much too expensive for what it is. A Smart Electric Drive, which is much better built, and much nicer to drive, is only €450 ($589) more expensive if bought without the battery, and the monthly rent for the battery is €15 ($20) cheaper. Then Smart offers the choice of buying the battery, Bolloré doesn’t. And nobody can’t ignore that the Renault Zoe, which only asks for €1,700 (2,223) more… That makes the Mitsubishi i-MiEV and its twins from Peugeot and Citroën as the only competitors to the Bolloré Bluecar’s from a pricing point of view, but here again, the Mitsubishi is much better on the road, and it has a more quality interior.