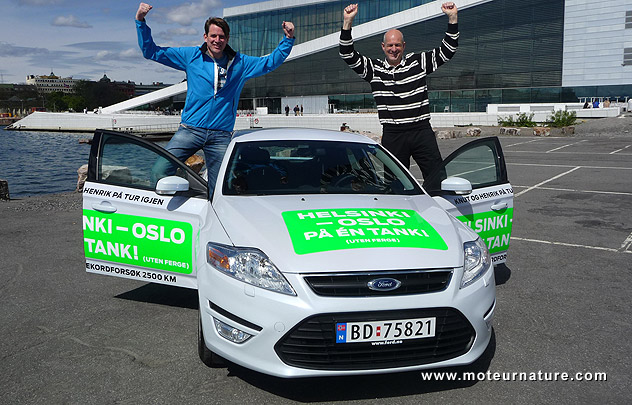 Henrik Borchgrevink and Knut Wilthil, two Norwegians, decided to do something fun, and green. A road trip from Helsinki (Finland) to Oslo (Norway). That, without getting into a ferryboat to cross the Baltic Sea, they drove the whole trip, taking the Northern road via Haparanda, in Sweden. The whole trip was 1533 miles long, and guess what? There was still some fuel in the tank at the end. They had to drive some 43 more miles before running on empty and stop.

They had used 18.7 gallons of diesel fuel to drive 1576 miles, and the trip took them 46 hours. That equals to 84 mpg, driving at an average speed of about 37 mph. Impressive numbers for a family sedan of this size. The Mondeo is the European version of the Ford Fusion, and the car was totally stock. It was the Econetic model, optimized for fuel-efficiency, fitted with a 1.6 liter 115-hp diesel, a 6-speed manual transmission and a Stop and Start system. It’s a popular sedan in Europe, and it’s easy to understand why.

Some people say that the electric car will win, and it’s funny to read about EV fans cheering when one of them has been able to drive 300 miles without recharging. Road trips like this one show how much the electric car has to go before it can get close to the best internal combustion cars.