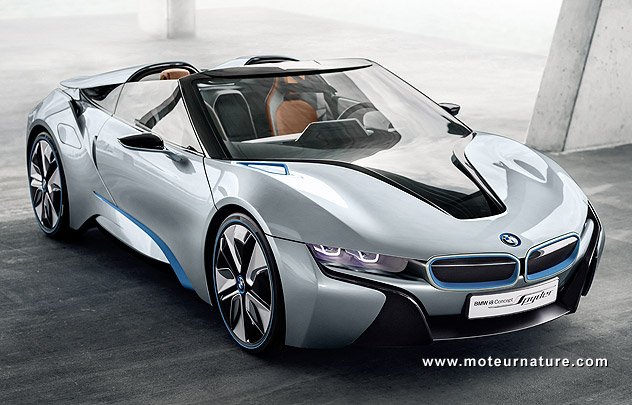 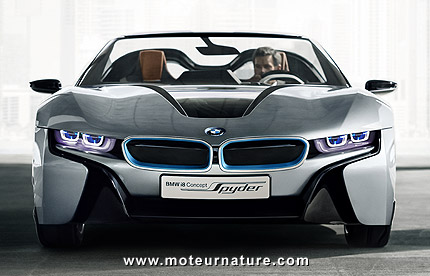 Unveiled under universal acclaim at the Frankfurt motor show in 2009, the BMW Vision EfficientDynamics concept quickly got the green light to evolve into a production model. The second version was the i8 Concept unveiled last year, and here’s a surprise: a Spyder version. It’s significantly different from the coupe, because it sits on a shortened wheelbase. With 6 inches less, the 2+2 coupe has become a 2-seater spyder. The overall design has evolved too, and it looks somewhat more like a production model now. The plug-in hybrid drivetrain is the same though, with a 3-cylinder turbocharged 1.5 liter 164 kW (223 hp) sending power to the rear wheels, and a 96 kW electric motor over the front wheels. 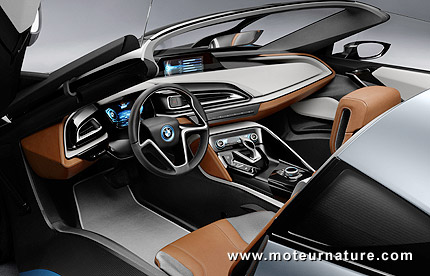 Weight is up slightly, but battery’s capacity is not. BMW doesn’t reveal it, but it should be between 5 and 5.5 kWh, which translates into a very limited driving range on electric power. The coupe was advertised with 20 miles, it’s down to 17/19 miles in this Spyder. On a $100,000-plus car, you have to wonder if drivers will take the hassle to plug. The plug-in Prius only offers a 13 miles range in EV mode (according to the EPA), so most people buy the standard model (without a plug). With a smaller battery and without the need of a charger, the BMW i8 would be lighter, faster and cheaper. It would be a normal hybrid, and it would be better!