It’s so easy to fill up a gas car. The driver goes into a gas station anytime he wants, without any need to make an appointment beforehand. It may not be as easy with an electric car. There are times of peak demand where electricity is scarce, and there are several places in the world where charging an electric car would be discouraged at those times. A smart grid may be a solution. Mitsubishi is building a small one for test purposes in Japan. 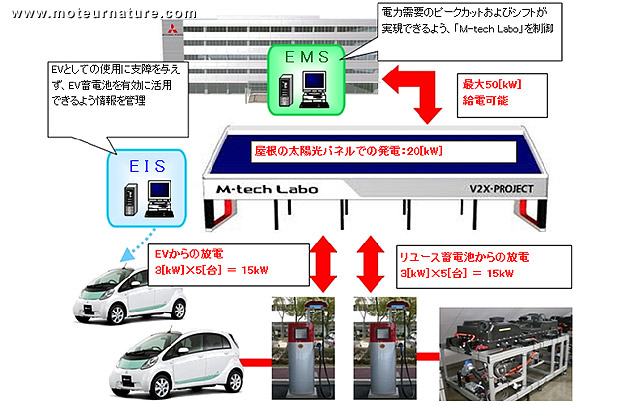 The first element is a large building with its roof covered with solar panels. They’re rated at 20 kWh. There are parking for 5 cars below, all Mitsubishi i-MiEVs, and 5 used batteries from old electric cars behind as back-ups. Each car and battery is fitted with 3 kW bidirectional charger. They can charge or discharge each car or battery according to needs, or the driver’s will if he wants his car charged as soon as possible, or if he doesn’t mind waiting for the following morning.

The whole project is supervised by the Japanese Ministry of Economy, Trade and Industry (METI), as part of the Eco-City Keihanna Next-Generation Energy and Social Systems Demonstration Project. It will probably prove effective, but at what cost!