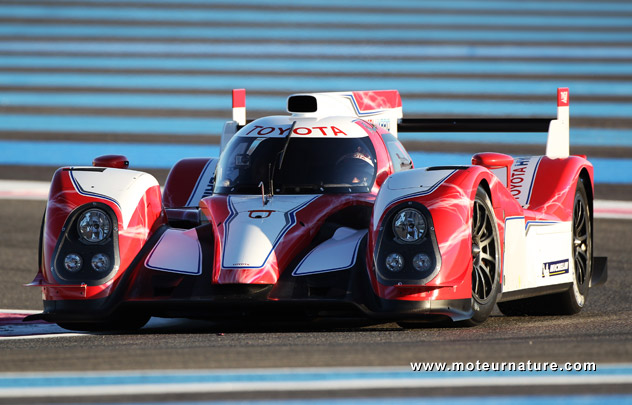 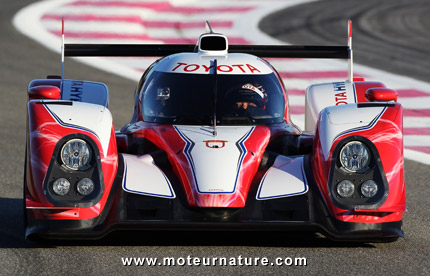 Toyota’s announcement to race a hybrid car at Le Mans 24 Hours raised of a lot enthusiasm, but also many questions. Sure, the Prius is a great car, praised the world over, but it’s a fine road car with average performance. Can the same technology be successful in racing? The Prius is great at part throttle, but in the famed 24 hours race, drivers are foot on the floor for more than 12 hours. There’s also the long Hunaudières straight, where at its end cars go from more than 200-mph to 60-mph in one single braking. It’s a fantastic opportunity for recovering energy that would be lost otherwise, but it’s so strong you’d wonder if a battery could stand it. The Toyota TS030 hybrid doesn’t have any. 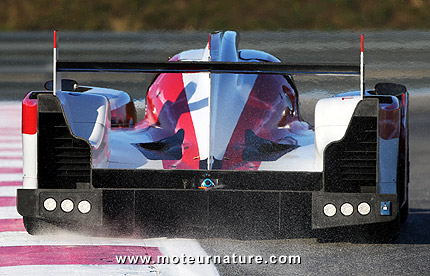 This Toyota TS030 hybrid is totally new from the ground up. From its carbon-fiber-reinforced-plastic (CFRP) body to its 3.4-liter V8 engine, everything has been designed on purpose. The V8 has 4-valve per cylinder, the gearbox is sequential 6-speed, pretty standard stuff but what sets the Toyota TS030 apart from all the competition are its 2 electric motors. One for the front wheels, one for the rear wheels. Surprisingly, Toyota chose 2 different suppliers. Front motor is built by Aisin AW, whereas the one in the back comes from Denso. Actually, the difference is academic since both have been Toyota’s partners for a very long time. 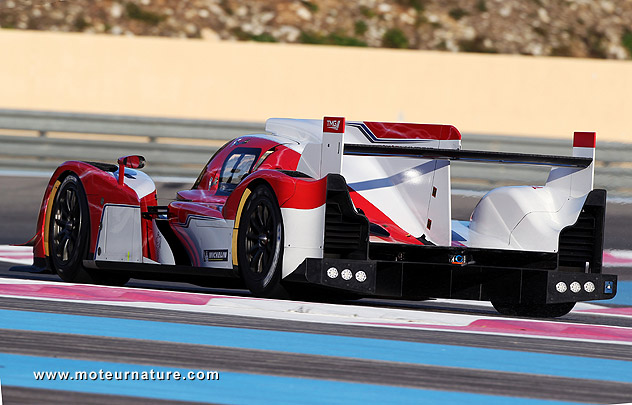 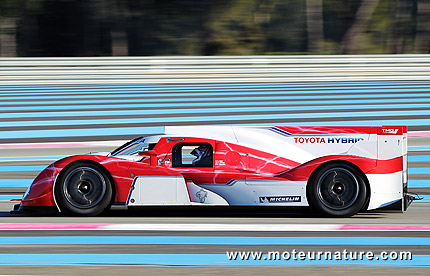 The advantage of having one motor on each axle probably lies in regenerative braking. There’s more of it on the front wheels, whereas it’s better to send the power to the rear wheels to accelerate. Note also that at low speed, the electric motor can power the car all by itself. Gas engine is off, but that feature should be useless on the track with average speed around 140-mph at Le Mans. When it comes to energy storage, Toyota chose a supercapacitor from Nisshinbo. It’s faster than a battery to get electricity in or out, it should also prove much more durable in a competition environment. The car made ​​its first outing at the Paul Ricard, in the South of France, and all the pilots were impressed right from the start, with the car beginning to move on electric power only (watch the video). Many people should recognize the tall guy in the middle on the pic below, he is Alexander Wurz. His teammates are Nicolas Lapierre and Kazuki Nakajima. That’s for the first car, but Toyota will bring another one to race in Le mans. 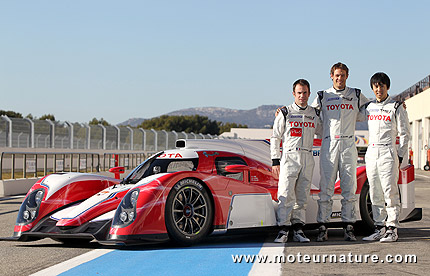 Having said that, everything else is wild speculation. There has been a hybrid racing at Le Mans before, but it wasn’t successful. Let’s guess that the best thing about those 2 hybrid cars will be added interest to a race that had just suffered from the announcement of Peugeot’s withdrawal. Many thought Audi would be left all alone, getting all the limelight and bringing home an easy win. The Audi diesels have proven themselves fantastically reliable, and the German is the most experienced by far. Few people would bet on the hybrid Toyota, but maybe that’s not the point. How about fuel economy? Which car will be the most efficient: the Audi diesel or the Toyota hybrid?