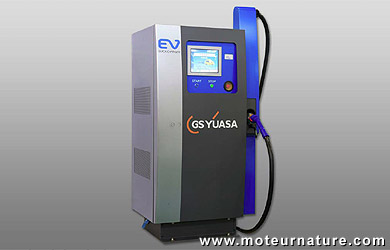 According to the association that manages the Chademo standard, there 787 quick chargers for EVs in Japan (our picture shows a GS Yuasa unit). Most belong to private parties, and are independently managed and serviced. Not all of them are accessible to the general public. Obviously, there would be a lot to gain if those hundreds of chargers were promoted and maintained all together. Sharing these tasks is precisely the first goal. 9 large Japanese companies will work together in that end, with 3 car manufacturers among them. They are Honda, Mitsubishi, Toyota, ULVAC, Kanematsu, Kandenko, Suzuyo Shoji, Chubu Electric Power, and the Development Bank of Japan. Surprisingly, Nissan is not of them.

Each quick charger owner will now be able to register its charger in a central database, and the organization will make all charger information known to its end-users members, which are electric cars drivers. That is the main goal: to promote EVs and sell memberships to the quick chargers network. Users will pay a monthly fee and get the right to use all chargers from the organization. We wish them luck, and note that the network is entirely in private hands. The Japanese government isn’t involved anywhere.