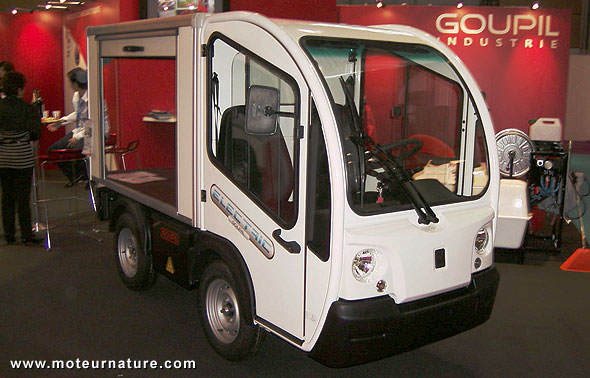 I would have bet nobody had ever heard of Goupil in America. This is a small French manufacturer selling tiny electric trucks. They’re building about 100 each month. These trucks are narrower than a Smart Fortwo and shorter than a Mini. Those unusual dimensions don’t make them look good, but they’re very easy to use cleaning small streets or gardens. You can see them all over France, working silently and efficiently.

Besides the vehicles, there’s something unique about this company: it is profitable! I have yet to see another company building EVs actually making money. Goupil Industrie is the only one there is, and that attracted many investors, some of them coming from as far as America. Nobody expected it but they made a deal. Goupil Industrie has been sold to Polaris. Much better known, that’s the company building quads (some electrics) and snowmobiles. Polaris had bought Global Electric Motorcar earlier this year, with Goupil, the company will be a global leader in EVs.

There’s no word about future product plans, but Polaris now owns 2 engineering and production units on both sides of the Atlantic, with several hundreds people trained and experienced designing and building EVs. I believe they have a strong future. They will also much stronger to face eventual Asian competitors.