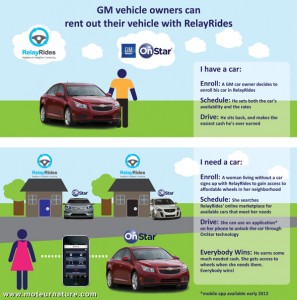 Several automakers have invested in car-sharing recently. One example is the Daimler group, which has launched car2go. Yet what they offer is not car-sharing stricto sensu. Their service is more like car rental, albeit with a very short minimal renting time. You pay by the minute for a car that many other drivers may also use the same day. Yet all the cars are the same, belonging to the same unique owner, and you don’t share his car the way you can share a meal with a friend. So how about another way of car-sharing? With a new system that would be closer to the normal meaning of “sharing”? RelayRides offers just that.

No 2 cars are alike, because they all belong to different people. People like you and me who wants to make a little extra cash. The company started offering its service last year, but it’s about to change dimension now that it has teamed with General Motors. The automaker doesn’t bring cash into the venture, it’s coming with much more: millions of cars with OnStar enabled. You probably know that system which associates a navigation system, emergency services and remote unlocking. That makes any OnStar enabled car the perfect candidate for car-sharing. RelayRides will take advantage of it, in what is undoubtedly the most important news in that business for a long time.

Any owner of an OnStar enabled car can join the program. That person will have to allow complete strangers to drive his car, but he will make money from that. Most cars are available $7-10 an hour. RelayRides takes a 15% cut, with another 20% going for insurance. So that’s 65% of what the occasional drivers pays which go the owner of the car. They set themselves the price of their car, and its availability. Sounds good? It sounds smart and promising. This program with GM starts early next year. It should allow millions of people to make a quick buck, with millions others able to get cheap wheels just when they need them. If the software is right, RelayRides may be on top of a gold mine.