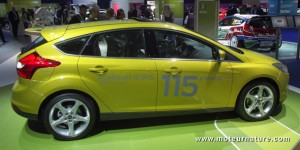 The Ford stand was one of the best at the Frankfurt show. A stunning plug-in hybrid concept, the Evos, a high performance version of the Focus (with a 250-hp engine), a Formula Ford race car, yet the most important new model was this yellow Focus. This is not a sports car, nor is this the most frugal Focus. That one is the Econetic model, which has a diesel. But this Focus promises to be much cheaper, and seduce many buyers all over Europe. In this segment, Volkswagen opened the downsizing ball with a 1.2-liter in its Golf, but Ford’s doing it better. 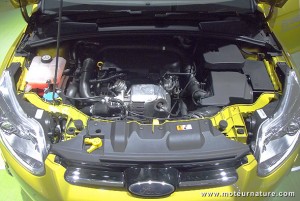 This Focus has a new small Ecoboost engine, a 3-cylinder 1.0-liter engine. We know some motorbikes have larger engines. With a turbocharger and direct injection, it’s making 120-hp, so performance should be more than adequate, if not sporty. Torque is more impressive, with 125-lbs/ft constant between 1300 and 4500-rpm. A non turbocharged 1.6-liter wouldn’t be as good. Official fuel economy figures are not yet known, but this hatchback Focus should get more than 47-mpg combined. The “115” value on the side refers to the CO2 emissions in g/km, it’s the same value that an hybrid Honda CR-Z gets. That is impressive. Definitely the biggest news from Ford at Frankfurt.