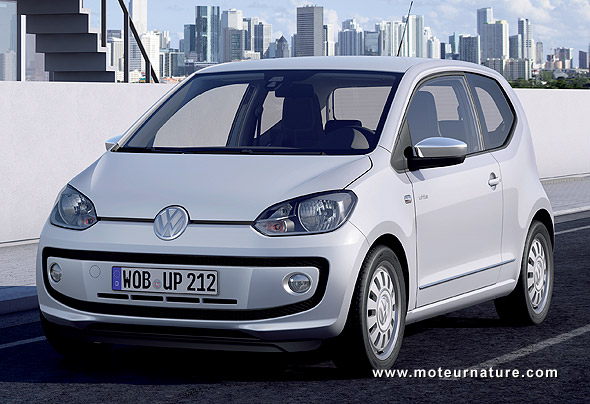 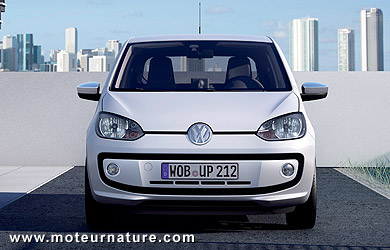 This is one very important little car because of two reasons. The first one is that it will produced in very large volumes, which is explained by the second reason: Volkswagen is back in the economy cars segment. We had been waiting for this. The Polo used to have that role in Europe, but the latest model is almost like a Golf, and it comes most often with many luxury equipments, like automatic air conditioning. Buyers looking for a bargain have to look elsewhere, and they do: the Koreans are cashing in. Here comes the up! to compete? It’s 139 inches long and 65 inches wide. That’s smaller than a Toyota Yaris, but it should provide a decent back seat, thanks to a very long 93 inches wheelbase. That’s only 2 inches shorter than a Volkswagen Polo which is 17 inches longer! Pictures are showing well how short the overhangs are. 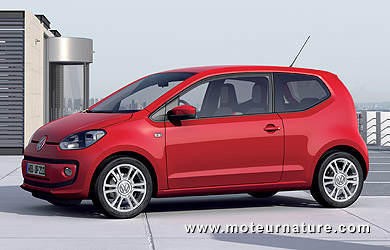 Those small exterior dimensions should come with very affordable pricing, with a base price below the 10,000 euros mark ($14,371) in Germany, tax included. So you’d guess Volkswagen developed this economy car with as many existing parts as possible, but it’s quite the opposite. Everything’s new in the up!. It has new 3-cylinder engines on a brand new platform. That one should be a milestone, as Volkswagen’s planning several new models built on it, including a very small minivan that could be a successor to the old Bulli. The Seat and Skoda brands shall also use it extensively, and we may expect more than one million cars built on this new platform each year, after 2015. 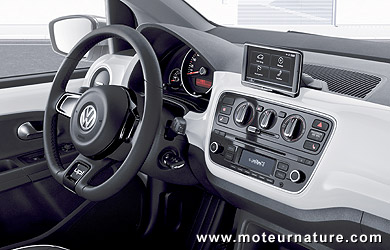 The engine is new as well. This is a 1-liter 3-cylinder, which will come in 2 power levels: 60 and 75 hp. Hardly exciting numbers, but that’s not the point. The up! is about cheap wheels. A 5-speed manual will probably be the only transmission offered, and Volkswagen’s already announcing a CNG version. A diesel was much more expected, but there won’t be any at launch. That is much, much surprising from Volkswagen, a world leader in diesel, on the lab floor as well as in the marketplace. There will an electric up! in 2013, tough. 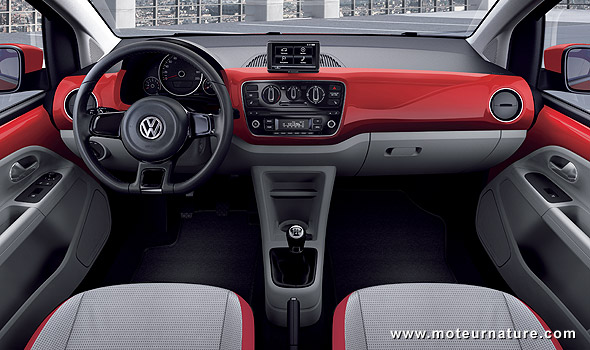 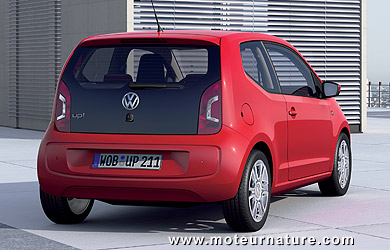 Volkswagen’s designers have been working hard to make an interior that will be cheap to build, yet nice-looking, they’ve chosen to use some metal inside. The younger folks will probably look at it as a novelty, but it will bring back many forgotten memories to the older guys. An automatic emergency braking system will come as an option, which will be a first in this segment, but it’s the fuel economy that will most likely be at the top of customers’ requests. Base versions should be good performers, which the BlueMotion Technology package will make them even better. The up! BlueMotion will get 56-mpg with the 60-hp engine, and 54-mpg with the 75-hp unit. Those are great numbers! 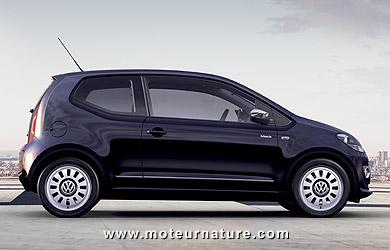 With both units, CO2 emissions will be just below the 100 g/km mark, that is a bit better the hybrid Honda Insight. The Ecofuel model, running on CNG, will have even lower CO2 emissions. 86-g/km on the standard version, and down to 79-g/km with the BlueMotion Technology package. This is an option that groups a Stop & Start system, lower resistance tires, an intelligent alternator, etc… It should be made standard, but it would raise the price significantly, something Volkswagen wants to avoid. Hey, the idea is to make a new people’s car: it has to be affordable to anyone.