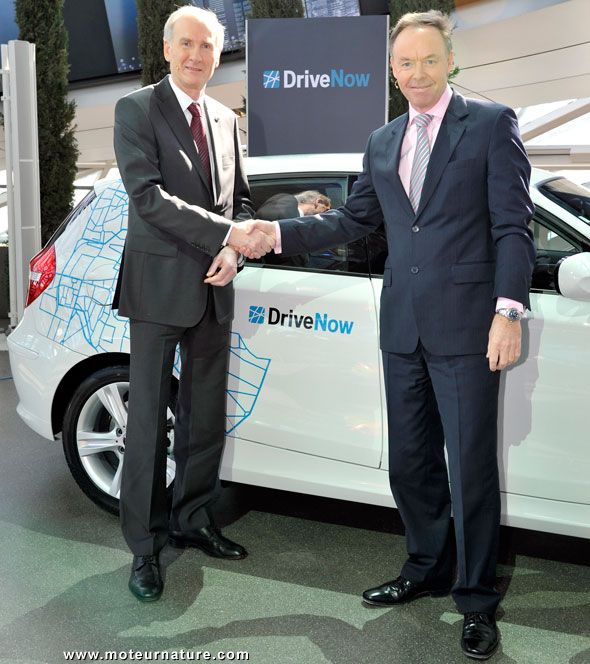 Many people have yet to be convinced that car-sharing can be a viable business, but European car manufacturers are certainly not among those. Daimler was first when it launched the car2go scheme in Ulm (Austin, in Texas would follow) in 2008, with Smart cars, BMW will follow next month in Munich. The bavarian manufacturer doesn’t go the car-sharing road alone, he will do it with Sixt, a leading German car-rental company. BMW will bring the cars (1-series and Mini models), while Sixt will bring its expertise in the business (managing fleets and customer relationships).

The new venture will be called DriveNow, which BMW and Sixt will own together equally. Their ambitions are big, as they will start with 300 cars next month in Munich. DriveNow will be even bigger in Berlin, with no less than 500 cars! Quite surprisingly, the cars will not be cheap low-spec models. They will be small cars, but they will be all luxuriously equipped, with the best trim level available. Cost? There’ll be a 29 € entry fee ($41) to gain access to the service, cars would then be available for .29 € per minute ($.41) everything included (fuel, insurance…).

The cars will be on the streets, some on allocated parking spaces, but there may also be just about anywhere else, and users will be able to leave them anywhere as well. All cars will remain permanently under the control of a software management system that will know each car’s location. Users will log into it with their smartphone to find the nearest car available. No keys will be needed. A smart card will be used instead, you’ll get it at a Sixt office when you pay the entry fee.

After car2go in Ulm and before Autolib in Paris, it shows that big players believe in car-sharing in Europe, you may also think of it as a very short time rental service.