It will sound strange to some people that if you can afford a Mercedes S-class, you will want the economy of a diesel. But Mercedes sells more S-class with a diesel than with a gasoline engine in France, the UK and several European countries. Even in Germany, without a speed limit on many highways, a place where you could fully enjoy the higher power of a gasoline engine, diesel has a 45% market share on the S-class. But it’s easy to understand why if you have the opportunity to test drive the diesel S-class. The engine is so refined, and so well insulated that most likely, you would not notice it’s a diesel under the hood. But you will see it at the pump!

With an excellent resale value, diesel has won many customers on the top end of the market, so much that some of them want more of it. I mean more power. Tuning kits for diesels have been around a while, but emission regulations have become much more stringent recently. And they will only get harsher with the Euro 6 regulation that will come into force in 2014. As Mercedes has done a lot to make its diesels clean, the 2011 S 350 CDI already satisfies the 2014 limits. This is the model Brabus has chosen to work on. 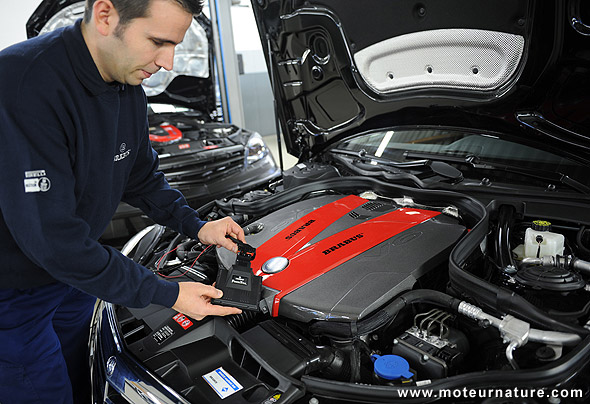 The tuner came out with its new ECO PowerXtra D6S that bumps horsepower from 258-hp to 313, whereas the torque goes from 457 to 509-lbs/ft. Fuel economy is mostly unchanged. Brabus says that in some case the higher torque will make the car more fuel efficient, but the most important to my eyes is that the car keeps its emissions below the Euro 6 limit.

Many people criticizes the diesel engine, but here’s another proof that they are here to stay. Sadly, this kit is not available in the US, nor is the diesel S-class. I think this should change sometimes.