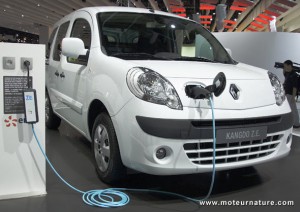 Emission-free, oil-free, electric cars have a bright future. Some people give them a tenth of the market in rich countries in 2020. All car manufacturers have invested millions in electric car Research & Development, but none has invested more than the Renault-Nissan alliance. The 2 brands made a 4 billion euros investment (5.2 billion dollars), and together they expect to sell more than 500,000 electric cars per year from 2015 on.

This huge investment is well-known. As a journalist, I’ve already received more than one hundred press releases regarding electric cars from Renault-Nissan. I also have dozens of pictures, concepts or productions models, which I took at motor shows all over Europe. So competitors or car manufacturers wannabes know it all over the world: if you want to start an electric car business, you will have to walk in Renault’s footsteps. And there might be something else.

Today’s electric cars are poor performers, with a very limited range (100/150-miles). Technology will make them better with time, and that’s where Renault’s huge investment could mean something. If there is something to be found to improve electric cars someway, it would be most logical that Renault would find it first. Could Renault have found some breakthrough? All I know is that there’s nothing revolutionary in the electric models that will be launched this year: the Fluence, the Kangoo (pictured) and the small Twizy.

If there is something, it’s something further away, a technology not yet patented, but that’s pure speculation. I repeat it, I don’t know if Renault has found anything, but I know something has been leaked. That’s all we know, as there wasn’t any press release to explain things, and no legal action (which would provide data) has been started yet. The only facts are that 3 Renault employees got suspended (without pay) on Monday. In French law, it means those persons were asked to stop working immediately for deliberately endangering the company’s assets, and that they were sent home without taking their company’s computer with them. Next came Eric Besson, French industry minister, who said the matter was serious, but besides that it’s related to electric cars, no further explanation was given.

The most worrying fact is that one of the 3 men suspended, Michel Balthazard, is a member of Renault’s Comité de direction, the management team at the very top of the company. He’s not a young guy writing stupid things on facebook, but a fifty-something high-paid top executive, with more than 30 years within the company. He had full clearance to access any information he wanted. If you look at Renault’s organizational chart, Carlos Ghosn is at the top, with Michel Balthazard at the fourth place. How can a man in this position do something wrong?

There’s more questions than answers, but I understand Renault’s position will be tricky. If the company starts some legal action against its employees for misconduct, it would most likely require to explain what happened in front of a court, and what was leaked. Is this what Renault wants? About what was leaked now, if a competitor is seen taking advantage of it, can justice prevent it? What if that competitor is from China? Or would that leak force Renault to speed up things to keep its lead?

We all know the oil business lies in a dirty world, and there was an expectation that electric cars could lead us to a better world. There’s no doubt that electrics are greener than their gasoline counterparts, but I see that a part of the business will remain in murky waters.