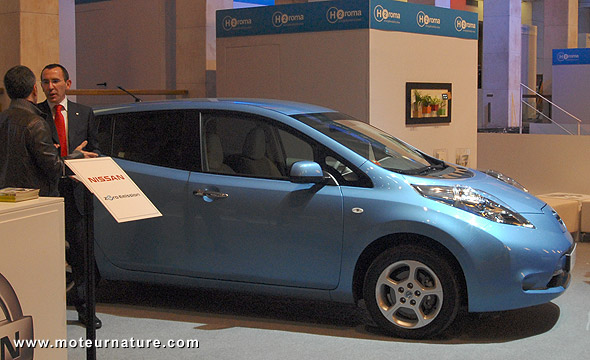 I got the press release from Nissan about its Leaf, last year, Sunday the 2nd of August. The Japaneses don’t live the way we do. No western manufacturer would have launched a new model on a Sunday during the Summer break, but Nissan did. I had to leave the beach to go back to the computer, but I wasn’t disappointed since I had been waiting for years for a proper electric car from a large manufacturer.

The Leaf was all I had been waiting for, except for its design which isn’t distinctive enough for my taste. For a car that’s such a breakthrough, I would have enjoyed a look that would have made the Leaf stand out on the road. It won’t and judging for the large numbers of people waiting to get their car, that didn’t matter much. Olivier Chalouhi, from Redwood City, is the first customer, he got his Leaf on Saturday. I wish him a good time, and I wish the Leaf thousands more of happy customers. But I see that the electric car still have along road to go before being mainstream.

I’ve seen my first Nissan Leaf last March in Geneva, thousands of people reserved theirs the following month, and they’re still waiting! You fill several forms, you wait more than 8 months… This is no way to buy a car. Gasoline cars rule our world, and the electric car deserves to be found on dealer lots, waiting for car-shoppers to stop by. Until that happens, electric cars share of the market will remain marginal.