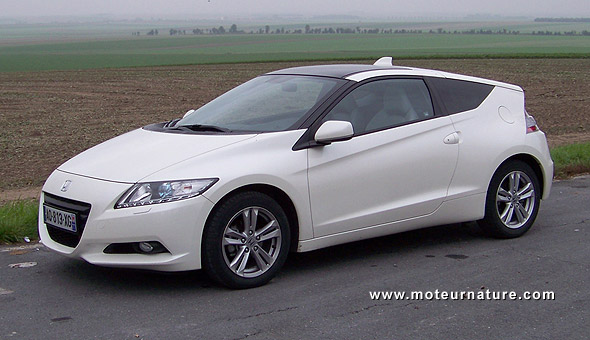 The CR-Z sports coupe, the latest addition to Honda’s hybrid car range, just got a distinction: the car of the year title in Japan. I can only confirm the choice of the Japaneses judges. Since I’ve had the opportunity to test drive a CR-Z for a few days, I know it’s one of the most entertaining car in its price range. It’s also the most fuel-efficient by a huge margin, and this is what matters.

I’ve done close to 500 miles with the CR-Z I had, I first drove it quite fast as the Honda drivetrain is truly enjoyable, and my fuel consumption was a correct 35 mpg. Then I drove it more conservatively, not hypermiling, but respecting all speed limits and driving in a normal way you would drive an hybrid, and I got a very respectable 48 mpg. I’m sure I could have got much better, maybe 55 mpg. With the CR-Z’s good look, and the fun of its manual transmission, the little Honda is a winner to me, and so it was to the Japaneses. An unexpected bonus was that the CR-Z is surprisingly roomy for a 2-seater. I hate the Tesla roadster because it’s so difficult to get into it (I’m a pretty big guy), whereas the CR-Z is as easy to use as a sedan with lots of room inside, for my knees as well as for my head.

There was a first this year, not that the awards ceremony is a very exciting show by Hollywood standards, but the 2-hour long event has been recorded, with the video available online. It’s all in Japanese, so you may not understand a single word, but just in case you may want to have a look, I’ve embedded it below. Please note that this video is awfully slow to load. It might be streamed from Japan, I’m not sure. So I advise to launch it, then to put it on pause after a few seconds. Do something else and come back to it after 10 minutes.

To be complete, there are 2 cars of the year in Japan. The Honda CR-Z has the title for domestic manufacturers, whereas the Volkswagen Polo (unfortunately not sold in America) got the title for the imported brands.