Arnold Schwarzenegger, governor of California, is pretty active when it comes to promote non petroleum fuel, and he was in Sacramento to see 2 Audi A3 TDI (the car that got the Green car of the year award last spring) on a 1,000 mile endurance drive running on synthetic diesel. That fuel comes from Rentech. With the name of Rendiesel, it’s made from biomass. Rentech’s technology can produce the fuel from biomass feedstocks such as forestry waste (bark, branches, waste wood, sawdust and stumps), agricultural waste (corn stover, straw and bagasse), green waste (lawn and tree clippings), or even algae. Most important, and what sets Rendiesel apart from straight vegetable oil, is that it’s fully compliant with all applicable fuel standards, and therefore compatible with all existing diesel engines. Bosch, the German diesel specialist, which manufactures the fuel systems of all Audi diesel cars, has declared it safe to use. 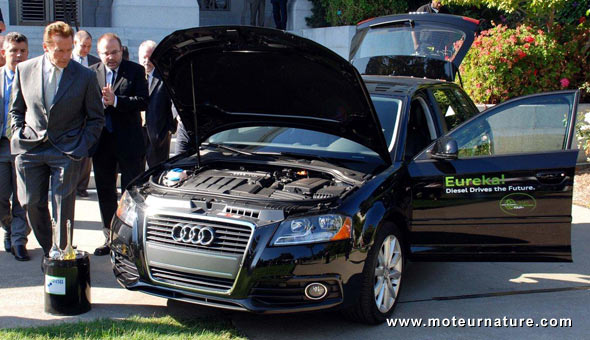 The cars were 2 Audi A3 Sportback 2.0 TDI, straight from the factory. They performed flawlessly as expected. One averaged 40 mpg, the other 43 mpg on the 1,000 mile journey, but we don’t know what their average speed was.

Rendiesel burns significantly cleaner than standard diesel fuel, and all toxic emissions most importantly particulate matter and nitrogen oxides (NOX) are reduced. There’s even a bit less carbon dioxide, and that should convince all of us that this Rendiesel renewable fuel shall be mass-produced everywhere possible. A factory is being built right now in Rialto, California, another one will be in Colorado.