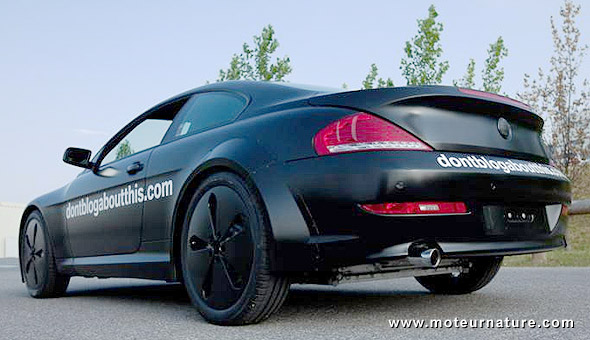 It’s about a website that goes with the strange name of dontblogaboutthis. It doesn’t come from goofy individual, on the contrary, it’s a company website from BMW group. What is it about? It’s about a modified BMW 6 series. Modified bimmers are quite common, but this one looks really strange because it has narrower tires than stock. The average German tuner wouldn’t have done it that way. Even more intriguing, the car seems to have wider tracks, but a very small single exhaust outlet. This can’t be BMW’s high revving V10 in front of that. Check the video below to find out.


No internal combustion engine sound. This car is electric! Well, it has electric drive, and the exhaust pipe tells us it’s an hybrid. Which remembers me the fantastic Vision EfficientDynamics concept from last year Francfort motor show (pictured below). It was a plug-in hybrid, the star of the BMW stand, and the star of the show according to every person I talked to there. The concept had so much success, and got so many praises that BMW had to say it was looking about turning it into a production model. The car shown on dontblogabouthis website is most likely a prototype of this upcoming model. This is going to be a great car, it comes with great marketing.