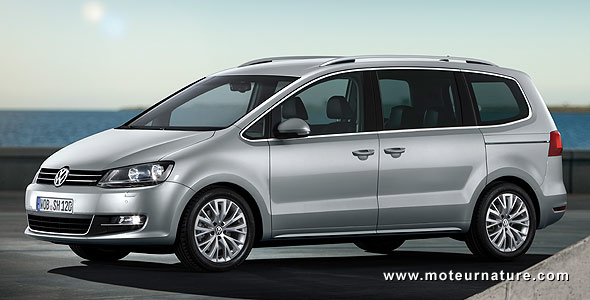 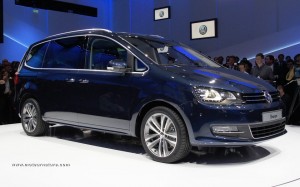 Minivans are not what they used to be. They have changed because we have and the manufacturers certainly took notice. Neither Ford nor Chevrolet offers a minivan anymore. We’re back to the eighties when following Chrysler’s lead, only a handful manufacturer had a minivan on sale. In Europe too, minivan sales have plunged, and the market leader, the Renault Espace, might not be replaced. But Volkswagen still believe in minivans. At least a little bit because it took the German manufacturer 15 years to replace its Sharan. Many people thought it would simply die without being replaced, but here comes a brand new model. Looking fresh and sleek, this new Sharan is the most aerodynamic minivan on the market with a Drag Coefficient of .299.

191 inches long, the Sharan is pretty large for a European car, but not large enough for American tastes, and this should prevent it to come to the US. Too bad, because under those flowing lines is the best technology from Europe. The engine is downsized 1.4-liter 4-cylinder. That sounds incredible, nobody in America would have thought of an engine this small in a minivan, but the Germans are doing it, and now the rest of the world will follow. With a super-tricky turbocharging system, this little motor makes 150-hp, with a very flat torque curve, peaking below 2000-rpm. Performances are not stellar, but are OK for family use. Fuel economy? How about 32 MPG. This is unheard of in the USA for a minivan. 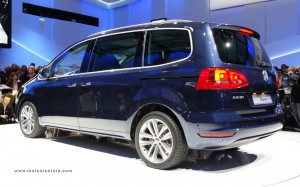 But in Europe, people want more. Drivers want the fuel economy of a diesel, where Volkswagen is a leader. With the 2.0-liter TDI, making 140 or 170-hp, the fuel economy increases to an exceptional 42 MPG on the official European tests. This is the result of great optimizing with a Stop & Start system, an intelligent alternator that only takes engine power during decelerations, and a double clutch automatic transmission. The bad part is that this doesn’t come cheap, as the Sharan retails for close to 40,000-euros in Europe.

European drivers are ready to put out that kind of money for a fuel efficient minivan, it remains to be seen if Americans would be as willing. From what I know, Volkswagen will not even try to find out.