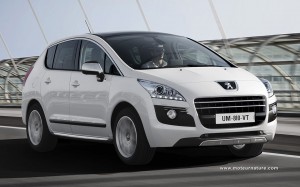 Have you ever seen a French hybrid? I did, on many, many, occasions, I even drove a couple in 2004 and 2006, and I think the first time I’ve seen a French hybrid was in 1991. It was a Peugeot 405 station-wagon. But all these cars were prototypes. This is the first French production hybrid. It’s also the first production diesel hybrid, which is much less newsworthy in my eyes. I know diesels are rare in the US, and that you feel special when you drive one. But in Europe, there are more diesels than gasoline cars, and few people make the difference anymore. They’re both internal combustion engines (ICE), and they both emit the same pollutants or greenhouse gases. So it’s ICE versus electric motors, the fight between gas and diesel is over.

The Peugeot 3008 is a compact SUV. A bit smaller than a Toyota RAV4, it’s a pretty good-sized vehicle, being a comfortable 4-seater but still compact enough for Europe’s congested cities. It’s Hybrid4 technology is a smart one, without any mechanical link between the ICE engine and the electric motor. How can that be? Very easily, the diesel engine is connected to the front wheels, whereas the electric motor sends its power to the rear wheels. So depending on the circumstances, or the driver’s will, the Peugeot 3008 Hybrid4 is a gasoline front-drive, or an electric propulsion, or a 4WD hybrid. The battery is a NiMH, which is a bit of a disappointment, as I know Peugeot has been testing lithium cells. Too bad they didn’t make it for the production version. 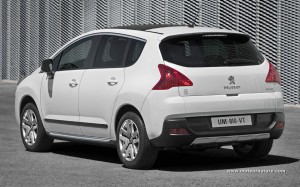 Fortunately, the Peugeot engineers have been more generous on the engine side, as they chose the most powerful engine available in the 3008 for this hybrid model. It’s making 163-hp. With the electric motor’s giving 37-hp, there’s 200-hp available, with a strong 369-lbs/ft. For a car that is the shorter than a Prius, we expect this 3008 to be a good performer on the open road, while still being a fuel miser, as the Peugeot 3008 Hybrid4 is rated at 62 MPG on the European official fuel economy tests.

The Peugeot 3008 has been available for about a year and a half in Europe, with gasoline or diesel engines. It has never been exported to the US, and this will not change with this new hybrid version.