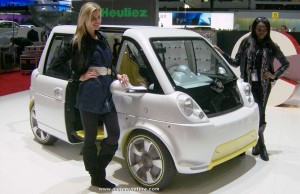 Will it be saved? Will it die? It has been going on for months. Heuliez, a french supplier to the automotive industry was trying to reinvent itself as a manufacturer of small electric cars. A tough challenge when the company had been loosing money for years, and was in need of several millions to complete the development of the new electric model. Finally, a solution has been found, imposed by the court actually, as Heuliez was under a protective scheme to avoid bankruptcy (quite similar to process of the chapter 11 in the United States). Heuliez will be split in 2. One part of the company will keep on going as an automotive supplier, as Heuliez has always been, but not as an independent company: it is taken over by Baelen Gaillard Industrie (BGI). More important to us, the other part of the company, the one who had started the development of the electric Mia, will fall into german hands. 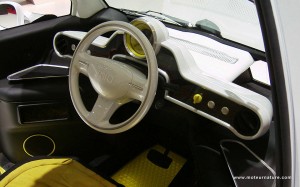 This was widely expected, the Mia electric car, which was originally presented as the Heuliez Friendly at the Paris motor show in 2008, and who got a face-lift and a new name (Mia) at this year Geneva’s show (pictures), now belongs to the Mia Electric Company. Its owners are 2 german companies. con|energy and the Kohl group. Both are complete strangers to the automotive industry. The first is a consultancy in energy management, the second is a pharmacist with many activities around home care. Their idea is that production and development would remain in France, but they would sell the car in Germany. This is ambitious because they will quickly have to compete with Volkswagen, who has its own plans, with the E-Up, a new small and affordable model that is expected in 2013.

The Mia electric will have the advantage of an earlier start, it should be available in the second half of 2011. But the best news is that after months of haggling, bad rumors, and even fears, as Heuliez has been very close to a liquidation, things have settled down. Around 120 have lost their job, it could have been much worse. The future of the Mia looks even quite rosy for the short term, as it will be one of the first true electric car available. I hope I ‘ll be able to test-drive it next spring.