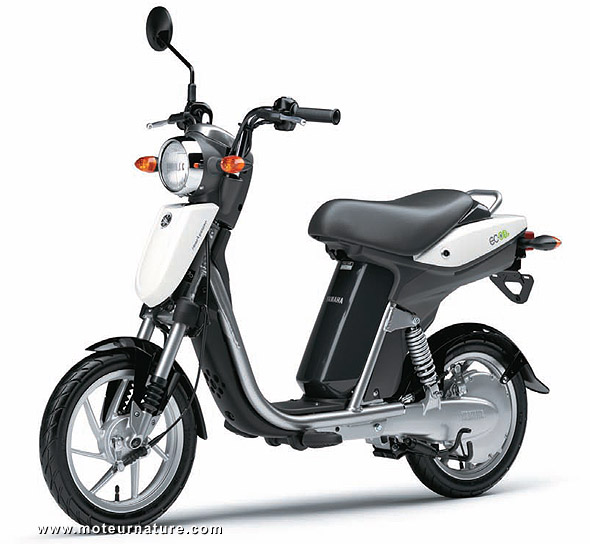 At last! There’s already a few electric scooters on the market, but they’re mostly chinese, which is a bit of a surprise. Because even if God rides a Harley, the kings of the motorcycle industry are the japanese. It appears that electric drives are beyond the frontier of their kingdom. Yamaha still, was a pioneer. It has shown several concepts with an electric powertrain since 2002, in Japan, but also in Europe and all over the world. I remember seeing the Passol at EVS21 in Monte Carlo in 2005. I asked when it would be available, but I couldn’t get a clear answer.

Yamaha sold it on its home market, from 2005, but not for long. There were problems with the battery, and sales were stopped. No more electric scooters from Yamaha. Nor from any other japanese manufacturer. This was sudden and unexpected, but happily, all that is over now with Yamaha’s launching this new model: the EC-03. Looking a lot like the old Passol, this EC-03 (not a very sexy name) promises cheap and reliable electric transportation, exactly where the japanese started with their gasoline motorbikes 50-years ago.


Very small, the EC-03 is sized so it can be parked everywhere. In Tokyo, some students might even bring it into their own bedrooms to plug it. With housing so tight and expensive in Tokyo, the EC-03 is 5-foot 1-inch long. Its weight? Barely 123-pounds. That is battery included, a small pack of lithium-ion cells, and the motor is correspondingly small, producing only 580-watts. That’s nominal, peak is 1400-watts. With so little power available, top speed is a feeble 18-mph, and range a very poor 26-miles

Yamaha has no plans to sell its EC-03 in the United States, but in Japan or in some crowded cities of Europe, there should a market for it. Clean-looking and clean to use, the Yamaha EC-03 should have the perfect fit and finish that we expect from Yamaha, I mean it will be much better that some cheap chinese products. Price will 252,000-yens in Tokyo, that’s $2,900. The EC-03 will be available in Tokyo this September, and we can expect it in Taiwan and Europe sometimes next year.